Editorial: Harassment of all kinds prevent women from entering politics 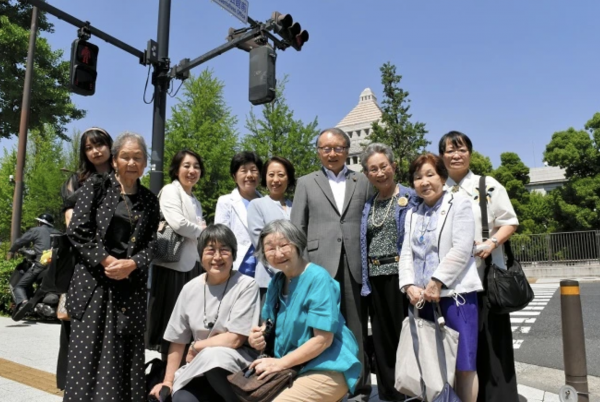 Members of a citizens’ group promoting a gender parity quota system celebrate the enactment of the revised law to promote gender parity in elections with Masaharu Nakagawa, an opposition lawmaker who played a key role for the legislation, in Tokyo’s Nagatacho district on June 10. (Sawa Okabayashi)

Many women engaged in politics in Japan are victims of sexual and maternity harassment from voters and their colleagues. This outrageous situation must not be allowed to continue.

Not only is such harassment a powerful factor that deters women from pursuing political careers but it also constitutes a grave human rights violation.

A revised law to promote gender parity in elections that passed the Diet during the regular session and came into force last week includes provisions designed to prevent sexual and maternity harassment against candidates and members of the Diet and local assemblies.

Maternity harassment is a form of harassment targeting pregnant women.

The law requires the national and local governments to provide awareness and counseling programs to tackle the scourge of harassment against women. They need to take effective steps without delay.

The political community has been badly lagging behind the business world and the government in responding to rampant workplace harassment.

Many female politicians have suffered sexual harassment of various forms. They have experienced being followed home after giving a speech on the streets, for example, or received sexual messages sent to their social media pages or suffered unwanted touching or physical contact by other assembly members or voters.

Candidates and assembly members are public figures with their faces and names known to a wide range of people. In many cases, female politicians hesitate to go public with sexual harassment complaints against voters or supporters and often decide to suffer in silence.

The problem is said to be especially serious in local assemblies. In a survey of local assembly members conducted earlier this year by the Cabinet Office, some 60 percent of the female respondents said they had experienced some form of harassment.

In an Asahi Shimbun survey of first-term female members of local assemblies conducted before the unified local elections in 2019, one in every four respondents said they had suffered sexual harassment. In some serious cases, the victims were even forced to refrain from assembly activities.

Political parties, the Diet and local assemblies have all failed to take effective steps to address the problem. They are responsible for taking specific actions fully in line with the objectives of the revision to the law.

A nonpartisan group of lawmakers that has been championing the revision to the candidate gender parity law originally sought to introduce a provision that would require parties to set targets for ratios of women among their candidates.

But they abandoned the plan in the face of strong opposition from the ruling Liberal Democratic Party and Nippon Ishin (Japan Innovation Party) and opted to focus instead on measures to prevent harassment, a less discordant issue.

The stances taken by the LDP and Ishin toward the proposal have raised serious doubt about their intention to commit themselves to the basic principles of the law, which call for political parties to make the utmost efforts to ensure the numbers of their male and female candidates match as much as possible.

Women account for only around 10 percent of Lower House and local assembly members and occupy just over 20 percent of the seats in the upper chamber. Nearly 20 percent of all municipal assemblies have no female member at all, according to a Cabinet Office survey.

Nara Prefecture is at the bottom of the list with some 40 percent of the municipal assemblies in the prefecture lacking a female member.

These figures mean the voices of women in local politics are drowned out by an overwhelming male majority, resulting in biased policies. The proliferation of harassment against women in politics is a symbol of this disparity.

The upcoming Lower House election will be the first poll in which members of the lower chamber are elected after the candidate gender parity law was enacted. It will be a major test of the parties’ commitment to the cause.

If the election shows that parties’ voluntary efforts are unlikely to make a significant change, the Diet should give serious consideration to other ideas.

These include requiring parties to set related numerical targets and, if necessary, introducing a gender quota system that would set aside a percentage of seats for women or mandating a ratio of women among a party’s candidates.