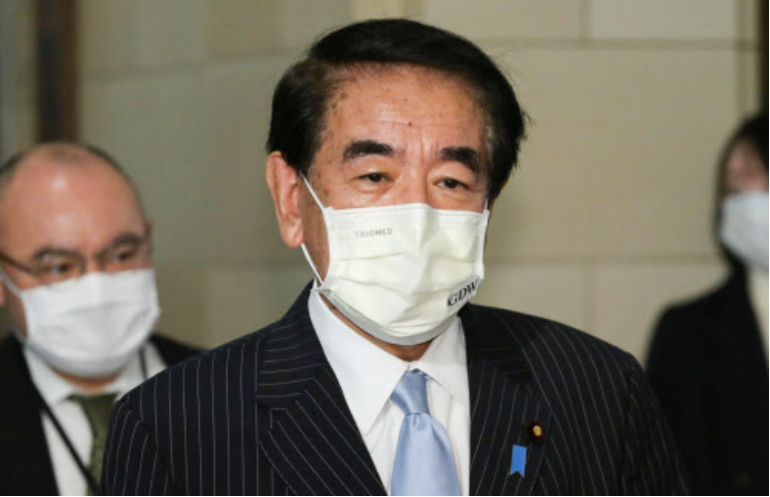 Policy Research Council Chairperson Shimomura Hakubun goes into an LDP executive meeting at the National Diet Building in May.

The topic of their conversation was a monthly magazine that went on sale a week earlier in which Abe named Shimomura and three other politicians as candidates to succeed Prime Minister Suga Yoshihide (72).

Abe said, “It’s only natural that I included Shimomura in the list of candidates.” Shimomura published a book in April and referred to a conversation with Abe in it. In the conversation, Abe described Shimomura as a “sworn ally,” an expression that brought them dramatically closer together.

Abe used to belong to the largest LDP faction, led by [former LDP Secretary-General] Hosoda Hiroyuki, to which Shimomura also belongs. Abe is expected to return to the faction after the next Lower House election and change its name to the “Abe faction.”

Only post-Suga candidate in Hosoda faction

Shimomura was the only Hosoda faction member who was cited by Abe as a post-Suga candidate. Shimomura told members of his inner circle, “Abe made a bold statement.”

The members of the Hosoda faction also include former Defense Minister Inada Tomomi (62), Education Minister Hagiuda Koichi (57), and Economic Revitalization Minister Nishimura Yasutoshi (58). But there is no universally acknowledged most likely candidate to become the next LDP president in the faction. It appears that Abe only backed Shimomura in the absence of a strong favorite.

Shimomura has also openly expressed his ambition to lead the party. In the 2020 LDP presidential race in which Suga prevailed, Shimomura noted that he had secured more than 20 recommendations and explored ways to run in the election.

Eventually, however, the Hosoda faction decided to back Suga, forcing Shimomura to give up his candidacy.

Shimomura and Suga both won their first seats in the Lower House in the same year. Other LDP leadership members such as General Council Chairperson Sato Tsutomu (69) and Election Strategy Committee Chairperson Yamaguchi Taimei (72) were also elected in that year. But it is hard to say that Shimomura is closely cooperating with them.

On April 22, Suga invited Shimomura to the Prime Minister’s Office [Kantei] for lunch. When Shimomura suggested a policy of stepping up vaccination against the new coronavirus, Suga said, “That has already been implemented.”

There’s a reason why Suga answered so matter of factly. Three days prior to the meeting, Shimomura had said, “It may take until next year” to vaccinate everyone who is 65 years or older.

Vaccination is Suga’s trump card in the fight against the new coronavirus. The progress of the vaccination rollout will have an impact on the Tokyo Olympic and Paralympic Games, the Tokyo Metropolitan Assembly election, the Lower House election, and the LDP presidential election.

A delay in vaccination would deal a heavy blow to the government. Shimomura touched on a sore spot. Until the lunch with Shimomura on April 22, Suga and Minister in charge of Administrative Reform Kono Taro (58) were busy denying Shimomura’s speculation about the delayed vaccination schedule.

A similar incident occurred right at the beginning of the year on Jan. 5.

Shimomura commented on the two by-elections for Lower and Upper House seats in April by saying, “If we lose both, people may wonder, ‘Is the Suga government OK?’” He also said, “We will face a volatile political situation (if we lose the by-elections.)”

At that time, less than four months had passed since the launch of the Suga government. Suga was in the hot seat ahead of the declaration of a second state of emergency. The comment led to speculation that “moves to remove Suga from the premiership have begun right at he beginning of the new year.”

Later, Abe reprimanded Shimomura in front of some Hosoda faction members, saying, “I want you to speak with an awareness of being one of the party’s top three executives.” Abe was worried that people would suspect Shimomura of acting in compliance with Abe and the Hosoda faction. This has spread the image of Shimomura “repeatedly bringing up political strife.”

Questions have been raised about Shimomura’s involvement in the next LDP presidential election. Abe, who can be described as his guardian, quickly took precautions. On May 3, he said: “Are we going to replace the president again after just one year? Suga should remain in the post of prime minister,” expressing support for Suga serving another term.

Why did Abe say that at such a time? People who are close to Abe say, “If Abe doesn’t speak up right away, the faction will be rocked by people who’ve grown eager to run in the presidential election.”

A senior member of the Hosoda faction points out, “If Shimomura makes a move [to run in the election], Inada and Nishimura will also be inspired to do so.”

The one hundred or so members of the Hosoda faction account for a quarter of all LDP members. It would be foolish for any Hosoda faction member seeking the post of party president not to take advantage of the faction’s power base.

Hosoda faction members who want to seize the party presidency first need to become the faction’s candidate. The person who holds the key to this is Abe, who is expected to be the next leader of the faction. One Hosoda faction member predicts, “Aspiring LDP presidents will compete in playing up their close relations with Abe.”

Since the beginning of the Heisei era, there have been 17 first-time prime ministers. Seven of them were in their 50s, six in their 60s, and four in their 70s, showing a decrease with advancing age. Kono was also first elected to the Lower House in the same year as Shimomura and he is nine years younger than Shimomura. The clock is ticking for Shimomura to throw his hat in the ring.