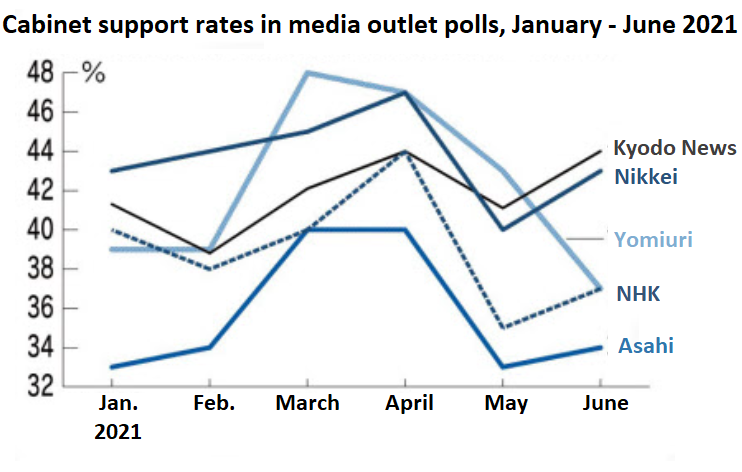 Many of the opinion polls conducted by the media companies in June showed the approval rating for the Suga Cabinet either staying the same or increasing slightly from the May poll. Driving this is the progress made in the COVID-19 vaccination rollout and the public’s more favorable evaluation of the government’s COVID measures.

In May opinion polls, the Cabinet approval rating declined across the board. Around that time, there was a resurgence of COVID-19 cases and the state of emergency was extended.

There were also concerns that Japan lagged behind other major countries in the rollout of vaccinations.

Reduced anxiety about the COVID vaccination may have stemmed the decline in Suga’s approval ratings.

In the NHK survey, pollees answering that “inoculation efforts are going well” increased from 9% in May to 24% in June.

Of the media company surveys, only the Yomiuri Shimbun’s poll saw the Cabinet approval rating fall in June. Backing for the Prime Minister dropped from 43% in May to 37% in June. This is likely because the Yomiuri conducted the survey in early June, when the administration of vaccinations had not yet picked up enough.

The public’s assessment of the government’s “COVID-19 countermeasures,” including non-vaccine efforts, rose across the board in June.

In the June survey by the Asahi Shimbun, 32% of respondents said they “approve” of the government’s response to COVID-19, up from the 23% found in May.

To a similar question asked in the June Kyodo News survey, 35.8% of respondents said they “approve” of the government’s COVID measures, up 10.6 percentage points from May.

In the June Nikkei survey, 39% of respondents said they “approve” of the government’s pandemic efforts, up 8 points from May. Meanwhile, 57% said they “disapprove,” down 7 points.

The Cabinet approval rating seemed to have stopped declining, but many surveys showed disapproval higher than support. In the June Nikkei, NHK, Asahi, and Yomiuri polls, respondents who “do not support” the Cabinet exceeded those who do.

In many polls, the plurality of respondents said the state-of-emergency declaration was lifted “too early” for the nine prefectures. The percentage exceeded 50% in the Nikkei, Asahi, and Kyodo News surveys.