Over 90% of executives say economy will be expanding by year-end, Nikkei poll of 100 major Japanese companies 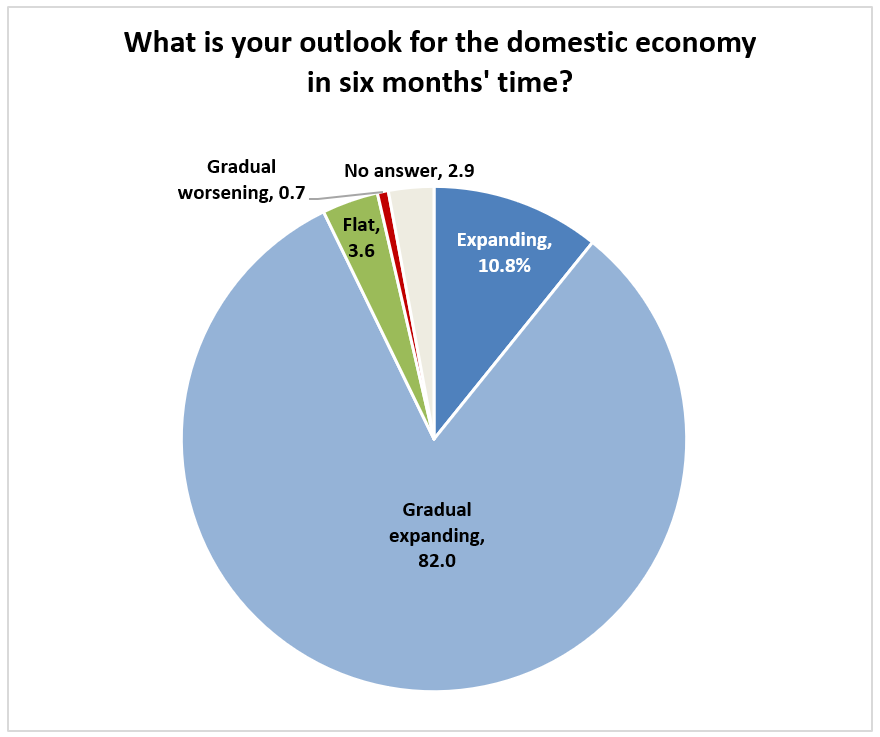 Business sentiment is turning up with the rollout of the COVID-19 vaccinations  progressing. According to the Nikkei poll of 100 major Japanese companies, more than 90% of business executives expect the economy to be expanding in six months’ time. More than 70% of the respondents said that COVID’s negative impact on economic activities will be over by next year. Business executives are clearly rushing to normalize their business activities, even while personal consumption and stagnation in distribution remain factors for concern.

The survey of major Japanese corporations was taken on June 4–21, and the presidents (or chairpersons) of 139 companies responded. The poll is taken about once every three months.

Asked when COVID’s negative impact on economic activities will end with the rollout of vaccinations in Japan, “in 2022” was the most frequently given response, at 61.1% (calculated excluding “no answer” responses). A total of 10.7% said that they expect the COVID impact to end by the close of this year. Meanwhile, 16.0% said that “in 2023” COVID would no longer be impacting the economy. Mitsui & Co. President Hori Kenichi said, “Vaccinations are on track in Japan, and the economic outlook is brightening as the U.S. and Chinese economies stage a robust recovery.”

The most frequently cited reason for anticipating economic expansion (multiple answers permitted) was “rollout of COVID vaccinations” at 82.2%. “Recovery in personal consumption” was next at 73.6%, and “recovery of the U.S. economy” followed at 43.4%. Sumitomo Chemical President Iwata Keiichi commented that “the economy is expected to continue strong, bolstered by exports to the U.S. and China.”

Asked for their views on the economy today, 59.7% described it as “flat,” making it the most frequently given response and essentially unchanged from the figure in the previous survey (54.3%). Although executives see bright prospects for the future, they see the economy as stagnant right now. Some 80% of companies cited the slump in personal consumption as a factor behind today’s “flat” economy. Kirin Holdings President Isozaki Yoshinori commented that “personal consumption has cooled as a state of emergency has been declared for the third time.”

Stagnation in the distribution system has grown more serious due to COVID-19 and is a risk factor going forward. Some 62.6% of companies said they are encountering delays in their materials procurement, and 53.8% said that the prices of raw materials and materials are high. A total of 42.8% of respondents said that the stagnation in distribution will continue after 2022, which may hinder recovery.