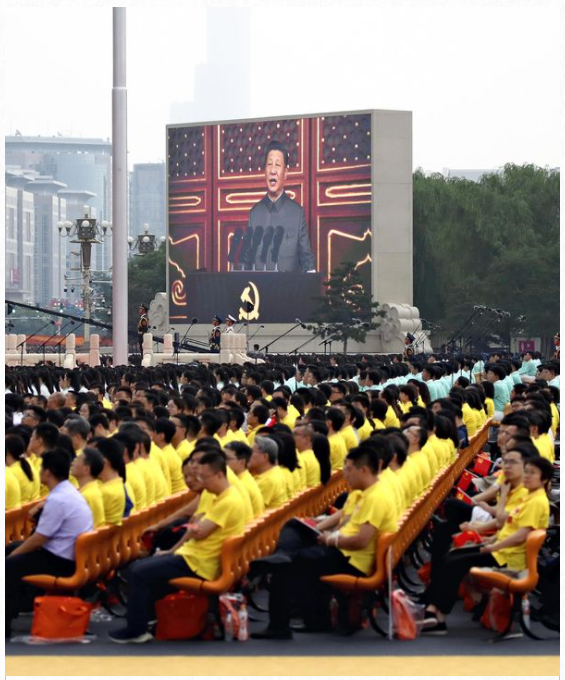 BEIJING — Chinese President Xi Jinping’s strongly worded speech to mark the 100th anniversary of the Chinese Communist Party’s founding on Thursday not only showered praise on the economic development conducted under his party’s rule, but also showed his determination to realize China-Taiwan unification.

“Solving the Taiwan question and realizing the complete unification of the motherland are the unswerving historical tasks of the Chinese Communist Party and the common aspiration of all Chinese people,” Xi, who is also CCP general secretary, said during the extravagant ceremony at Tiananmen Square in Beijing.

With regard to Hong Kong, where a national security law used to crack down on dissidents has been in effect for more than a year, Xi expressed his intent to further clamp down on democracy seekers and other activists.

The speech also reflected strong rivalry with the United States, which has been increasing pressure on China. Xi warned foreign nations thinking of bullying or oppressing China.

“Anyone who would attempt to do so will find themselves on a collision course with a great wall of steel forged by over 1.4 billion Chinese people,” he said.

In praise of the CCP, Xi summed up the party’s history since its founding in 1921 as having realized a huge leap forward by eliminating thousands of years of a feudal system of exploitation and oppression, while also winning the challenge of hegemony.

“Without the Communist Party, there would have been no new China,” he declared, saying that China has fully realized its long-term goal of building a “moderately prosperous society,” based on last year’s announcement that “absolute poverty” had been eliminated in rural areas.

Xi underlined the goal of building a “great modern socialist country” that will be on par with the United States by the middle of this century, while maintaining one-party rule. Xi, who has been concentrating power in his hands, is said to be eyeing the realization of his own long-term administration after the party congress in the autumn of 2022. He is believed to be hoping to use the historic ceremony to strengthen his authority.

In an aim to realize Xi’s political slogan, “the Chinese Dream of great national rejuvenation,” his administration is expected to exert more pressure on Taiwan to realize the unification with China.

While calling for peaceful unification, Xi said that others should not “underestimate the Chinese people’s strong determination, firm will, and formidable ability to defend national sovereignty and territorial integrity.”

His words seemed to be a warning to Taiwan President Tsai Ing-wen’s administration, which does not accept the “One China” principle.

Xi gave his speech from the gate of Tiananmen above the portrait of the People’s Republic of China’s founding leader Mao Zedong. Seated near him at the gate were other members of the CCP leadership and former party leaders including his predecessor, previous President Hu Jintao, 78, though former President Jiang Zemin, 94, was not seen in attendance. 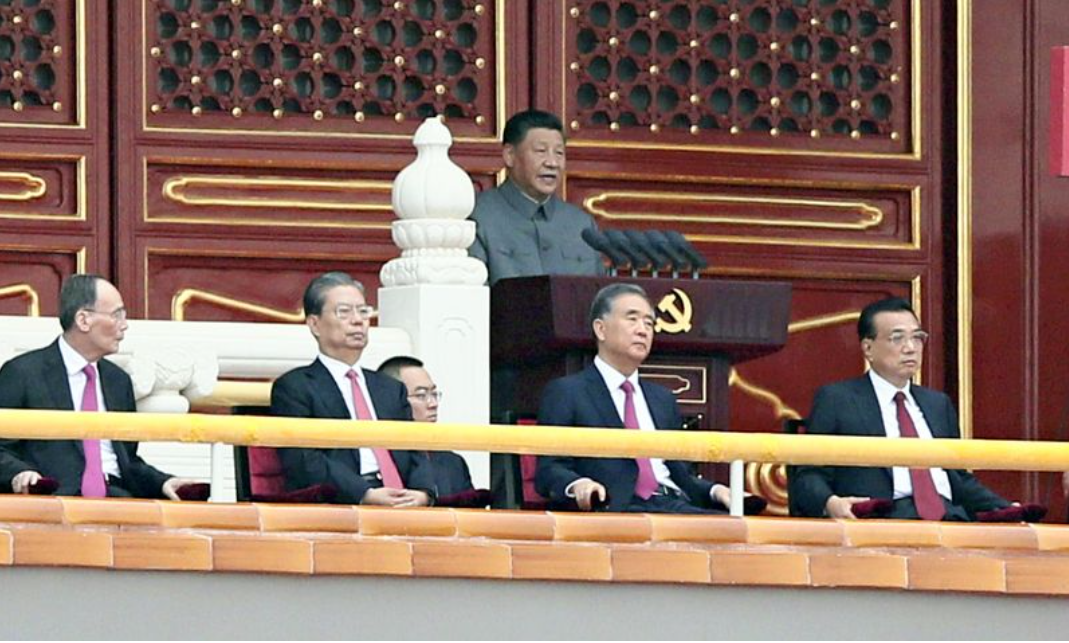 Koki Kataoka / The Yomiuri Shimbun / Chinese President Xi Jinping delivers a speech during a ceremony at Tiananmen Square in Beijing marking the 100th anniversary of the Chinese Communist Party’s founding on Thursday.