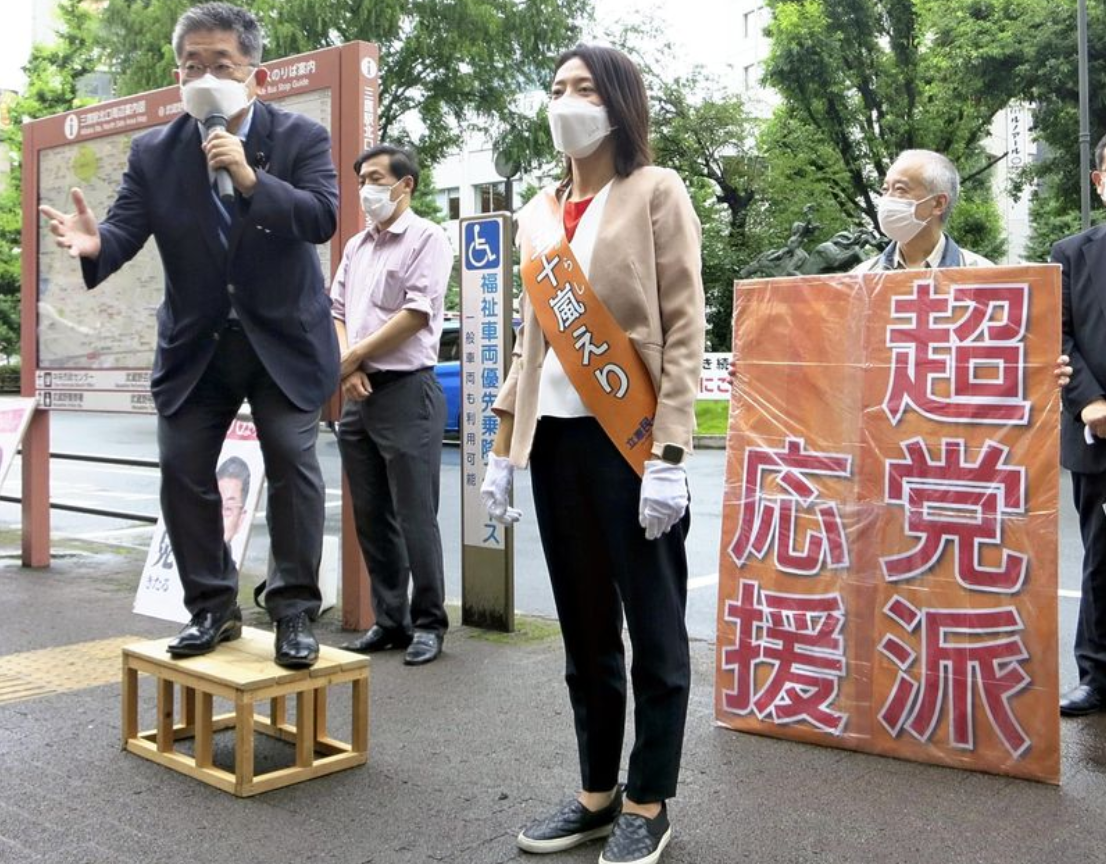 The Yomiuri Shimbun / Akira Koike, head of the secretariat of the Japanese Communist Party, speaks in support of a candidate fielded by the Constitutional Democratic Party of Japan in Musashino, Tokyo, on July 1.

The recent election for the Tokyo Metropolitan Assembly has cast a spotlight on the united front presented by the Constitutional Democratic Party of Japan and the Japanese Communist Party.

However, the CDPJ, the No. 1 opposition party in national politics, did not win as many seats as the JCP. As a result, the two parties are expected to struggle to coordinate their candidates in the upcoming election for the House of Representatives.

“We won a certain amount of support,” CDPJ Secretary General Tetsuro Fukuyama said Sunday night about the results of the Tokyo assembly election.

However, Yoshio Tezuka, secretary general of the Tokyo chapter of the CDPJ, expressed the prevailing view in the party when he said, “We were unable, as the No. 1 opposition party, to fully be a receptacle [for criticism of the administration].”

The CDPJ and the JCP coordinated their activities so that a candidate from one or the other would run in each of the five single-seat electoral districts, except for two districts where neither fielded a candidate. Among the 15 two-seat districts, candidates of the two parties competed with each other in only three.

They thereby sought to marshal votes critical of the administration in their favor, while avoiding harming each other.

The JCP won more seats than it held before the election. Looking back on the campaign, party Chairman Kazuo Shii said, “Voters responded to our appeals to attach more importance to peoples’ lives than [holding] the Tokyo Games.”

The CDPJ stressed the party’s confrontational stance toward the administration led by Prime Minister Yoshihide Suga, appealing for the postponement or cancellation of the Tokyo Olympic and Paralympic Games. However, its assertions were given little heed among the confrontation between the Liberal Democratic Party and its national coalition partner Komeito, and regional party Tomin First no Kai.

Unable to capitalize on voters’ criticism of the administration, the CDPJ saw a number of its candidates lose in close races with rivals, including candidates fielded by the JCP, in multiple-seat districts.

CDPJ leader Yukio Edano and Shii agreed in April to start negotiations aimed at forming a united front for the coming lower house election. But more than two months later, those talks have not begun yet.

The JCP is pressing the CDPJ to reach a policy accord aimed at an “opposition parties-united administration,” but the CDPJ has been unenthusiastic. This is because shades of communism would certainly alienate conservative voter.

Now that the Tokyo metropolitan assembly election is over, the two parties are expected to start negotiations shortly.

Speaking about the Tokyo assembly election, Edano said, in an apparent bid to forestall trouble, “I understand there will be various repercussions, but we have to differentiate a local government election from a national election.”

A senior CDPJ official expressed heightened caution, saying, “The JCP, which has strengthened its presence [in the latest election], could become so self-confident that the party might not readily agree to withdraw its candidates.”

For the eighth election in a row, Komeito’s candidates all won their seats in the Tokyo Metropolitan Assembly.

Although the party was unable to campaign in the way it hoped due to the novel coronavirus pandemic, a Diet member was assigned to support its candidates in each district, thus uncovering potential votes.

It was in a metropolitan assembly election that the Political Federation for Clean Government, the predecessor of Komeito, first gained a foothold for entering national politics. Therefore, the party has traditionally given assembly elections its highest priority.

However, due to the impact of the pandemic, the activities of Soka Gakkai, the lay Buddhist organization that supports the party, were considerably restricted this time around. Soka Gakkai abandoned plans to conduct what it calls “nationwide support,” in which members from various parts of the country come to Tokyo during the holiday-studded Golden Week in spring to rally support from acquaintances who live in Tokyo.

Party chief Natsuo Yamaguchi openly displayed alarm, saying, “It was quite an unusual election, even in our long history.”

The party therefore drew on its status as a ruling coalition member and touted its success in promoting vaccinations against the novel coronavirus. It also emphasized its differences with Tomin First, which has no Diet members, while intensifying its criticism of the JCP and other opposition parties.

In the final phase of the campaign, the party sent senior executives, including Yamaguchi and Secretary General Keiichi Ishii, to such closely contested electoral districts as the constituencies of Toshima, Nakano, and Meguro wards to back its candidates there and consolidate support.