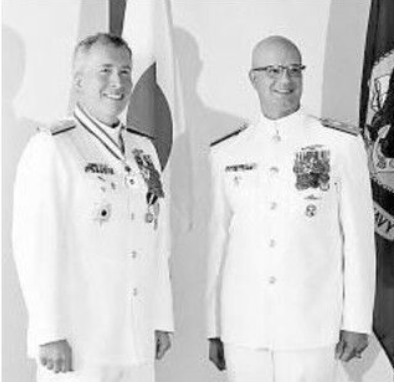 On July 14, a change-of-command ceremony was held at the U.S. Navy’s Yokosuka base (Yokosuka City) during which Rear Adm. Brian Fort relinquished command of U.S. Naval Forces Japan to Rear Adm. Carl Lahti. Rear Adm. Lahti said, “I am proud to serve as a member of the team of the U.S. Navy and the Japan Maritime Self-Defense Force, which maintain a free and open Indo-Pacific.”

Rear Adm. Lahti has served as a captain of a nuclear-powered submarine and a commander of a submarine base. This is reportedly his first assignment to Japan. Rear Adm. Fort, who has been commander of U.S. Naval Forces Japan for two years since 2019, will retire from the Navy.