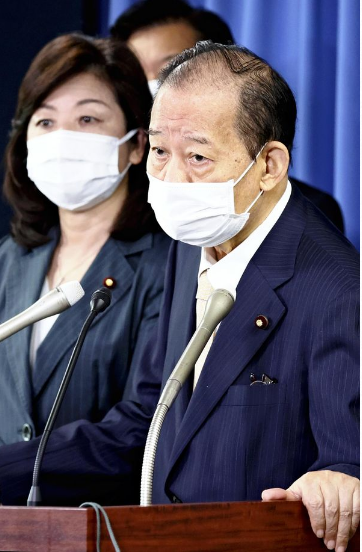 The Yomiuri Shimbun / Liberal Democratic Party Secretary General Toshihiro Nikai speaks at a press conference on Tuesday at the party headquarters in Tokyo.

With just three months left until the current term of office for House of Representatives members expires on Oct. 21, the Liberal Democratic Party is seeing intensified battles among its factions over nominations for party-endorsed candidates in the upcoming election.

“The everyday conduct of candidates will be evaluated in an election. We’ll replace our players whenever they skimp on effort,” Secretary General Toshihiro Nikai said in a stern voice that echoed through the press conference room of LDP headquarters on Tuesday. “That’s how we face the election.”

Nikai, the party’s No. 2 official, has a strong influence on the nomination of its official candidates.

Nikai’s remark can be taken to mean that he would not hesitate to replace candidates who are not working hard enough in their constituencies, and some interpret the remark as a sign of favor toward candidates of his own faction, angling for them to become the official LDP candidates for single-seat constituencies.

According to a Yomiuri Shimbun tally, 276 LDP candidates will run in 289 single-seat constituencies, with factional competitions to win the party’s endorsement in 10 constituencies — and the Nikai faction involved in most of them.

One example is Gunma Constituency No. 1, where Asako Omi from the Hosoda faction and Yasutaka Nakasone from the Nikai faction will face off.

Nikai appeared at a meeting held Saturday by Nakasone in Maebashi, the capital of Gunma Prefecture, asking the participants, “Please send him [Nakasone] off as our party’s representative.”

Amid such circumstances, the LDP held a meeting Tuesday with executives of its prefectural chapters in the Kanto region, including Gunma Prefecture, to discuss the party’s strategy for the next lower house election. The chapter members requested headquarters to “have a solid strategy to cope with constituencies where factions are competing.”

Nikai stressed that “under the ground rules, incumbent candidates have priority” in receiving the party’s endorsement, and Hayashi’s candidacy “goes against the party’s rule.”

Taking a tough stance, Nikai indicated that he would not hesitate to consider expelling Hayashi from the party.

The battle to decide on officially endorsed LDP candidates is expected to last until the last minute of the election. Election Strategy Committee Chairman Taimei Yamaguchi and others plan to tour the country to lay the groundwork for adjustments.

This fierce battle among factions stems from the fact that they have reasserted their presence after once forming an alliance to propel the unaffiliated Yoshihide Suga, who had a weak party base, into the prime minister’s post.

The introduction of the single-seat constituency system got rid of factional competitions of the type seen in the era of the multiple-seat constituency system, in which three to five candidates are chosen from one electoral district. But the competition has now morphed into a battle to win the party’s endorsement, and each faction is obsessively devoted to extending its influence.

Intensified factional rivalry, however, may bring public criticism for “hanging on to the party’s outdated characteristics.”

The Cabinet support rating is on the decline. At Tuesday’s meeting of prefectural chapters, Itsunori Onodera, a chairman of the Party Organization and Campaign Headquarters, said: “We have to endure the headwinds and hold our seats to the bitter end. To achieve this, we must mobilize the collective strength of prefectural chapters, local organizations and party members.”