TOKYO — Japanese chipmaker Renesas Electronics on Thursday reported a 115% jump in operating profit in the January to June fiscal first half, as the company recovers from a debilitating fire at its main plant and capitalizes on strong demand for semiconductors worldwide.

Renesas is a key chip supplier for Japanese automakers, including Toyota Motor and Honda Motor. The automakers’ operations have been severely hampered by the fire, which struck Renesas’ flagship plant in Naka, Ibaraki Prefecture, north of Tokyo, on March 19. The fire came even as a global shortage of semiconductors worsened due to a drought in Taiwan, the world’s chip production hub, and surging demand from other sectors, such as personal computer makers and data center operators, during the COVID-19 pandemic.

Production resumed at the Naka factory on April 17 and output appears to have returned to normal earlier this month. The company has said that it will make up for lost production by the end of the year.

Renesas is involved in both the front- and back-end of chip production. The front-end refers to the production of processors — or chips — while the back-end involves attaching the chips onto packages, so they are protected and ready to be connected to a computer’s motherboard. 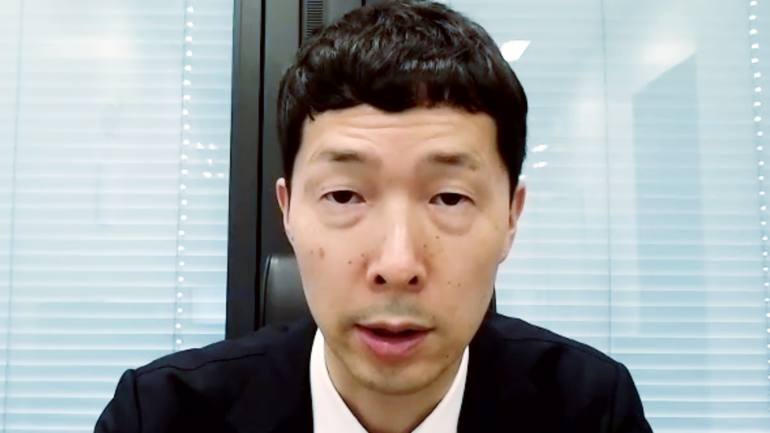 Renesas CEO Hidetoshi Shibata expects automakers will reduce output this year and try to make up next year, resulting in sustained demand for chips through next year. (Screenshot from Zoom)

Production at the front-end is now “running at 1.7 times the pre-fire level,” said Renesas CEO Hidetoshi Shibata. But he added that there are shortages of materials for the back-end process, such as resins and substrates. “If there’s any concern about production, it will be over the back-end of the production process,” he said.

Shibata expects demand to remain strong, including for personal computers, home appliances, autos and industrial products. He thinks automakers will reduce output this year and try to make up next year, resulting in sustained demand for chips through 2022. “It will likely take till the middle of next year before the supply-demand condition starts easing,” he said.

The fire came as the Tokyo-based company, created by combining the chip units of Hitachi, Mitsubishi Electric and NEC, was trying to move from being a niche player specializing in chips for controlling automotive engines. Renesas is the world’s second-largest supplier of automotive chips, after the Netherlands’ NXP Semiconductors, with a share of 17%, according to market researcher Omdia.

In 2017, Renesas bought U.S. chipmaker Intersil for $3.2 billion to move into production of chips for managing power supply and consumption. Such chips are widely used in autos and factory equipment.

In 2019, Reneas bought U.S. chipmaker Integrated Device Technology for $6.7 billion to move into chips for sensors, another important area for factory automation.

Last year, Renesas announced the acquisition of Dialog Semiconductor for $6 billion. The British chipmaker is strong in semiconductors used to regulate power use in small electronic devices.

These acquisitions are expected to help reduce Renesas’ reliance on the automotive business and diversify into areas such as data centers, 5G base stations and factory automation. In the last fiscal year, sales in the latter category reached 51% of the company total, compared with 48% for the former.