Miyagi Shina (43), an Okinawan and an Information Resource Center Assistant at the U.S. Consulate General Naha, was the main guest at an exchange program held at a hotel in Naha on July 25. Miyagi spoke about her two career changes, in which she leveraged the language skills she had gained through her two study abroad experiences in the U.S. Miyagi said that everyone can “gain skills even after entering the workforce,” and she encouraged participants to “challenge themselves” to pursue their interests or career. The event was co-hosted by the Consulate General and “IAm,” an organization that supports young women in reaching their goals. Students interested in study abroad as well as professionals involved in English-language education participated in the event. 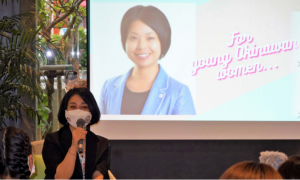 Miyagi graduated from Konan High School and Okinawa International University. Her career path was based on her study abroad experience and the following two objectives: (1) utilizing English and (2) connecting Okinawa and the world. Her first job was at “Makeman,” a home improvement center. After about seven years working in import operations, Miyagi answered the Okinawa Marriott Resort and Spa’s advertisement for a secretary to the general manager.

Miyagi started out as a nonpermanent worker at Marriott, which worried some of her relatives. Miyagi persisted, saying that she “wanted a challenging job.” Miyagi also participated in an “asakatsu (morning activities)” program where people from various sectors gathered to have discussions in English. Miyagi went to the café in Urazoe where the asakatsu took place on her way to work in Nago from her home in Tomigusuku.

Miyagi met a person connected to the Consulate General at the asakatsu, and this prompted her to apply for a position there. In her five and a half years at Marriott, Miyagi took part in efforts to expand customer services in addition to her secretarial duties, and she had felt that she had “given her all.”

Since starting her work at the Consulate General four years ago, Miyagi has been involved in government exchange programs, the operation of the three “American Corners” set up at prefectural or municipal libraries, as well as school visits. Saying that her job is “a series of new discoveries,” Miyagi noted that publicizing activities is an issue. She expressed her enthusiasm [for her job], saying that she “wants to more people to know that English is fun, not a chore.”

The participating students listened intently to Miyagi describe her career. They asked her questions regarding the programs at the Consulate General or on how to learn communicative English.