TOKYO — Japanese people will not soon forget the summer of 2021, when the Tokyo Olympics took place amid a declared state of emergency prompted by the COVID-19 pandemic.

The summer of 1971, exactly 50 years ago, also burns brightly in the memory of Japanese people. Henry Kissinger, the U.S. national security adviser at the time, secretly visited China and met then Chinese Premier Zhou Enlai. Following Kissinger’s trip, President Richard Nixon surprised the world with an announcement on July 15 that he would visit China in 1972.

Then, during a televised Sunday night address a month later on Aug. 15, Nixon announced the U.S. would end the convertibility of the dollar to gold.

The sudden plan for U.S.-China rapprochement was aimed at driving a wedge between China and the Soviet Union during the Cold War, while the new U.S. currency policy upset the postwar international currency regime overnight.

Despite the key decisions’ grave impact on Japan, a strong ally of the U.S., Nixon went ahead with them without consulting Tokyo.

Word circulated in Japan that Nixon had resorted to a tit for tat because of Tokyo’s delayed response to then Prime Minister Eisaku Sato’s pledge to settle a bilateral textile trade dispute in exchange for Okinawa’s return to Japan during the two leaders’ negotiations in 1969.

“I do not think the U.S. intended to insult Japan nor link the two shocks,” said Jeffrey Garten, dean emeritus of the Yale School of Management and former undersecretary of commerce for international trade. Garten examined inside facts about the “dollar shock” in his book “Three Days at Camp David: How a Secret Meeting in 1971 Transformed the Global Economy,” released in July.

President Nixon was obsessed with secrecy, according to Garten. In each case, Nixon wanted to make a dramatic departure from existing policy and tried to hold the information as close to his chest as possible.

“Japanese diplomats and other leaders were not as plugged in to the U.S. as Western Europeans were, which stemmed from the Western alliance during the war,” Garten said. “As a result, they didn’t have access to the same rumors and other inside information that Europeans did. So, the Europeans were not so shocked.”

Panic-stricken, the Japanese government hastily dispatched Yusuke Kashiwagi, an adviser to the Ministry of Finance, to the U.S. and Europe to gather information. Kashiwagi had just retired from the post of Vice Minister of Finance for International Affairs and was seen as the most internationally oriented bureaucrat at the MOF. Toyoo Gyoten, then head of the vice finance minister’s office, and Atsuo Takahashi, a former chief of the Customs and Tariff Bureau who accompanied Kashiwagi on his trips to the U.S. and Europe, both said they had not been able to clearly discern what was actually going on. 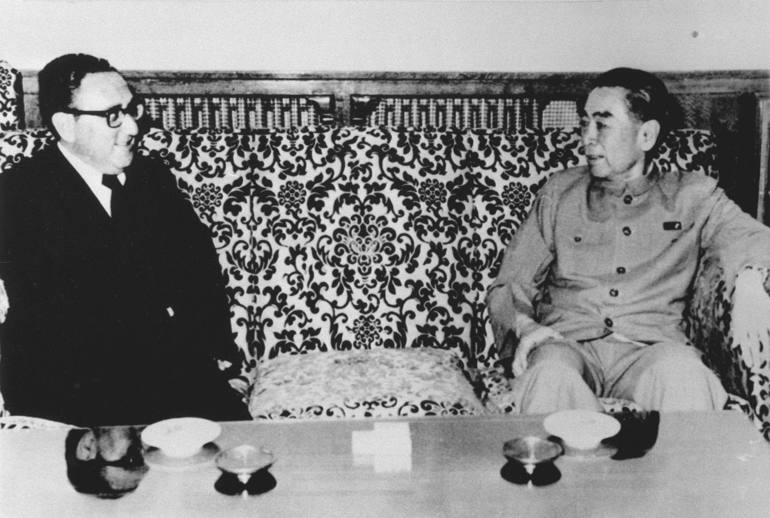 “The two Nixon shocks symbolized an end to the postwar era,” Gyoten said, who also served as vice minister of finance for international affairs from 1986 to 1989.

The U.S. led the international political and economic systems after the end of World War II. As massive American spending on the war in Vietnam and other factors made it difficult to maintain the gold-dollar standard in the early 1970s, the U.S. asked Japan and European countries to share responsibilities for currency adjustments. To sow discord between China and the Soviet Union, the U.S. approached communist China as a pragmatic diplomatic move.

After 50 years, it is worth asking what the two surprise developments have meant for the world.

In a speech on U.S.-China relations in July 2020, Secretary of State Mike Pompeo under U.S. President Donald Trump called American involvement with China since Nixon’s visit a failure, by saying “the old paradigm of blind engagement with China simply won’t get it done.”

Delivering remarks at the Richard Nixon Presidential Library and Museum in California, Pompeo observed: “President Nixon once said he feared he had created a ‘Frankenstein’ by opening the world to the CCP (Chinese Communist Party), and here we are.”

In its national security strategy report released in March, the administration of U.S. President Joe Biden continued its predecessor’s wary approach to China, describing the country as the U.S.’s “sole competitor” capable of challenging an open international system.

Biden is trying to get tough on China based on Trump’s legacies, according to Ryo Sahashi, an associate professor at the University of Tokyo.

In fact, U.S. policy toward China has arrived at a crossroads.

Swollen liquidity as a result of fiscal spending and monetary relaxation to fight the COVID-19 pandemic is flowing to the dollar as a safe asset. “The dollar’s nature as the key international currency is growing stronger,” Ryutaro Kono of BNP Paribas Securities Japan said.

Although the Chinese renminbi may pose a threat to the dollar’s position in the future, the current menace may be the dollar itself.

On July 19, U.S. Treasury Secretary Janet Yellen convened a working-group meeting with officials of U.S. financial watchdogs, such as the Federal Reserve Board and the Securities and Exchange Commission, to discuss whether to regulate stablecoins, a type of cryptocurrency linked to legal tenders such as the dollar.

More than half the dollar bills printed by the U.S. government are circulated outside the U.S., while international financial transactions are often conducted through dollar-denominated deposits. The U.S. has begun to examine whether to control stablecoins, assuming they could become a national security threat if such dollar funds are replaced by cryptocurrencies beyond its control. If circumstances warrant, the U.S. may shift to the introduction of a central bank digital currency, eschewing its current cautious stance on the matter. If this were to happen, Japan, European countries and others would be hit by a new “dollar shock.”

What has not changed over the past 50 years is the reality that U.S.-China relations and the future of the dollar are each vitally important to Japan. Half a century ago, Japan accepted U.S. decisions at all times and ran helter-skelter in the aftermath.

Although communication between Japan and the U.S. has vastly improved since those days, national debate on questions of U.S.-China tensions as well as economics and security has not adequately progressed in Japan.

Thorough preparedness is needed for Japan to stay calm in the face of sudden policy shifts. Time has shown that the lessons learned from 50 years ago are still valid.