ISTANBUL/JAKARTA — “You cannot board the plane with this certificate,” the airline personnel told her. A Japanese woman who got married in Turkey was stunned to learn at a regional airport that she could not take a flight back to Japan.

Her problem was proof of a negative test result for COVID-19 that did not match Japan’s specifications. And she was just one of many Japanese citizens who were turned away at airports because they failed to present the specific form required by Japan’s health ministry.

Many countries, including Japan, require that PCR tests be taken within certain hours before departure as a condition for entry.

But while other countries accept proof of negative COVID tests issued by a medical provider, Japan since March has required that its returnees have their doctors fill out custom forms drawn up by the ministry.

In some cases, people were sent back after arriving in Japan because the form was not filled out correctly. Alarmed by a surge in such problems, the foreign ministry has urged the health ministry to accept forms that have the same information as the Japanese form. Still, uninformed airline personnel keep rejecting people who lack the government-designated document.

If a passenger is turned back at the point of entry due to incomplete documentation, the airline assumes the cost of transporting the person. This naturally makes carriers more cautious in checking passengers’ documentation.

Beyond Japan, medical providers issue PCR certification as PDF documents or in other digital formats. For those completing Japanese forms, which must be handwritten, this presents what seems to many an unnecessary hurdle. 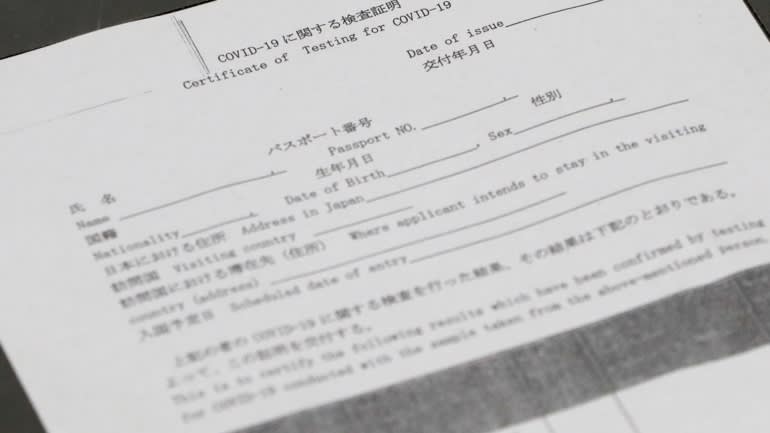 Another source of confusion lies in screening methods for coronavirus. Initially, Japan would only certify a negative result if the samples came from nasopharyngeal swabs or saliva.

However, tests taken abroad normally combine samples from both nasopharyngeal and oropharyngeal swabs. Japan-bound travelers complained of the hassle of looking for a medical facility that conforms to Japanese standards.

Japan’s health ministry added the combined sample option to the PCR form in July. But many places overseas list nasopharyngeal swabs as “nose swabs” or in similar terms. Because of these discrepancies, Japanese missions overseas warn travelers of the possibility that such PCR tests will lead to their being refused entry on planes or into the country.

“Repatriation to the country of origin is a basic human right, and refusal of entry due to incomplete documentation is excessive,” said Naoko Hashimoto, an associate professor at Hitotsubashi Unversity who is an expert in international law and immigration policy.

In particular, when people are deported at the point of entry, it is uncertain whether the destination country will receive them.

“It would be rational to have people arriving in Japan undergo testing and isolation at the airport before granting them entry,” said Hashimoto.

Some returnees have been caught up in a bureaucratic turf war. In one case, a chartered Japan Airlines flight took about 200 Japanese expats and their families from Indonesia on July 25. The Japanese foreign ministry said the passengers could quarantine at hotels and corporate housing chosen by their employers, provided that the applications from businesses were submitted beforehand.

Some passengers had already sent parcels filled with their personal necessities to the hotels and housing they thought they would isolate in.

One angry passenger asked the health ministry whether the hotel cancellation fee would be refunded by the government, but an official told him to ask the company to negotiate with the foreign ministry.

“I did exactly what the foreign ministry told us to do,” the passenger said. “This is quite irresponsible.”

At a Japanese embassy in Europe, an officer tasked with processing repatriation documents laments what he sees as his home country’s insularity.

“The international community is suffering as a result of Japan’s Galapagos mentality that insists on its own standards, its slow shift to digital formats and bureaucratic red tape,” said the official.