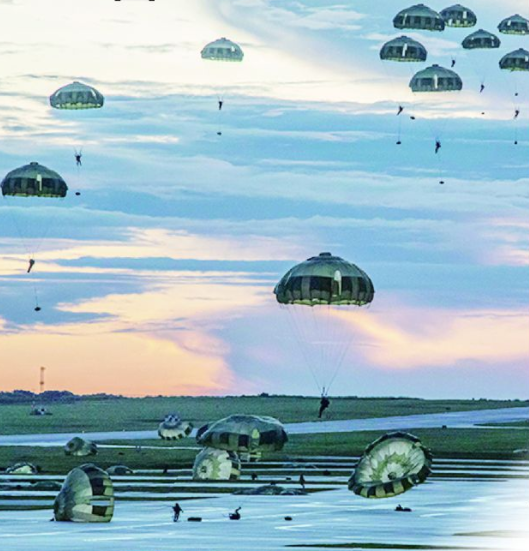 From July 29 to 30, the 1st Airborne Brigade of the Ground Self-Defense Force (GSDF) conducted a joint parachute jump training from aircraft at Andersen Air Force Base in the U.S. territory of Guam with the U.S. Army Special Forces stationed in Okinawa. This is the first time that the Japanese paratroop departed from Japan aboard U.S. military aircraft and jumped directly from the aircraft overseas. The drill is designed to strengthen the readiness of Japan and the U.S. to respond to an enemy invasion of the Japanese islands, and to strengthen the defense posture of Japan’s southwestern region, an area where China has been increasing its activity.

The 1st Airborne Brigade based at the GSDF Camp Narashino (Chiba Prefecture), which is the only parachute unit in the SDF, departed from the U.S. Yokota Air Base (Tokyo) at midnight on July 29 aboard two transport aircraft. Early in the morning of July 30, the paratroopers confirmed a series of actions under the scenario that they parachute from several hundred meters above Andersen Air Force Base to secure the airfield.

One of the features of the drill was that the aircraft travelled the long distance of about 2,600 km between Tokyo and Guam and the paratroopers parachuted from the planes directly to the airfield. The Japanese paratroopers have experience in conducting “Arctic Aurora,” a joint exercise with the U.S. Army in Alaska, to gain overseas parachute experience, but in that case, they changed aircraft locally.

The GSDF regards the latest joint drill as part of the “upgrading of various exercises,” which was confirmed at the Japan-U.S. defense ministers’ meeting in March. “This is an extremely important tactical capability considering the defense of our islands,” said GSDF Chief of Staff Gen. Yoshida Yoshihide during a press conference on July 29. “It is a strategic demonstration of Japan-U.S. cooperation,” the general stressed.