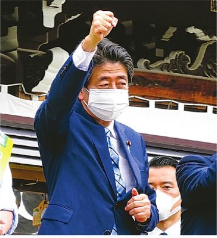 Former Prime Minister Shinzo Abe has been traveling around Japan recently to support his 96-member Hosoda Faction in the run-up to the fall election for the House of Representatives. In September 2020, he stepped down from the premiership because his chronic disease, ulcerative colitis, was worsening. But in June this year, Abe said, “I was told (by my doctor) that I no longer need to take immunosuppressive drugs.” He is looking much more energetic. What Abe says and does still attracts attention.

In an interview with the monthly magazine “Hanada,” Abe mentioned LDP Policy Research Council Chairperson Shimomura Hakubun as one of the post-Suga candidates. In late May, in response to a phone call from Shimomura, Abe told him, “It’s only natural that I mentioned your name.” In a subsequent interview with the monthly magazine, in June, Abe also mentioned, along with Shimomura, Education Minister Hagiuda Koichi, Minister in charge of Economic Revitalization Nishimura Yasutoshi, and former Education Minister Matsuno Hirokazu as strong post-Suga candidates.

“One of the candidates that I mentioned had asked me to mention him as a candidate,” said Abe, smiling wryly. It means a lot, however, to those whose names were mentioned by Abe. This is because Abe is expected to become the head of the Hosoda faction, the largest faction in the LDP, after the next Lower House election. His endorsement could bring these candidates closer to being a future prime minister. In fact, these four lawmakers have become known as “Abe’s big four” within the faction and are treated as such.

More than grooming his juniors, such moves by Abe will help establish his position as a kingmaker. While Abe was in power, he did not groom successors so that he could long remain at the helm of government. Likewise, by having the post-Suga candidates compete against each other, Abe is apparently trying to maintain his influence. During a BS Fuji TV program on May 3, Abe expressed his support for Suga’s continuing as prime minister. There is no sign that Abe will try to promote generational change all at once. A senior member of the Hosoda faction speculates, “Abe is probably aiming for a position of power in the party, not in the government.”

However, friction with LDP Secretary-General Nikai Toshihiro, who holds real power in the party, is inevitable. Seeing Nikai’s method of growing his eponymous faction by adding defectors from opposition parties, Abe sarcastically told his aides, “When you join the LDP, you enter from the second floor [Nikai in Japanese means the second floor], not the first floor [Ikkai in Japanese]. Abe accepted the post of chief advisor to the “Diet members’ caucus for the promotion of a free and open Indo-Pacific” founded by Nikai, but has avoided giving a talk in the presence of Nikai, who is regarded as “pro-China.” Abe has to maintain a delicate balance between him and Nikai, whom Abe appointed as LDP secretary-general.

There are other concerns about the revival of “unrivaled Abe.” There is the issue that 150 million yen was provided by the LDP headquarters to the party branch of [former Justice Minister] Kawai Katsuyuki and hsi wife Anri for the 2019 Upper House election in Hiroshima. The scandal happened while Abe was in power and the Nikai group frequently hints, “It is obvious who gave instructions for the provision.

Also, in the case of violation of the Political Funds Control Act in relation to the party held on the eve of the “cherry blossom viewing gathering,” a Committee for the Inquest of Prosecution voted that Abe’s non-prosecution was “partially unfair.” Abe’s former secretary is running from Nagasaki District No.1 in the next Lower House election, and there is a possibility that the opposition parties will rehash these issues. A source connected with the Hosoda faction said, “With many stains on Abe’s past, I hope that his return to the political spotlight will not result in the amplification of a negative image.”

With Suga’s approval ratings slumping ahead of the Lower House election, there is a strong sense of anticipation for Abe’s return as a relief pitcher. As the next head of the largest Hosoda faction, Abe said, “I’ll do my best,” but it remains to be seen whether he will follow through with his intention.