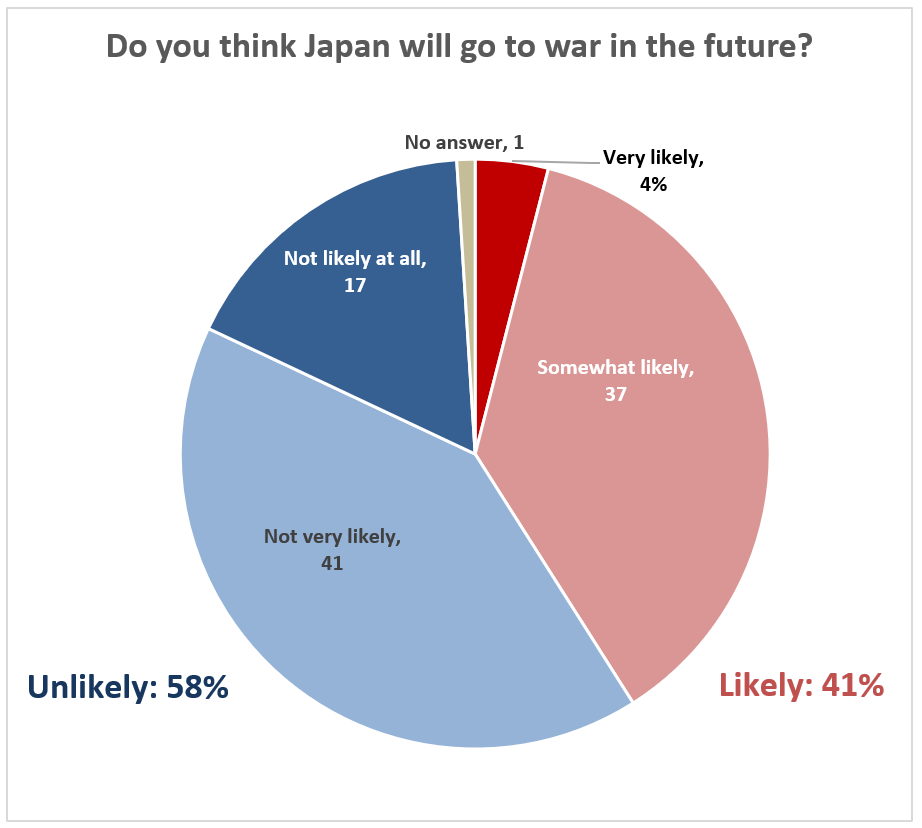 Nihon Yoron Chosakai conducted a nationwide mail-in poll to probe views on peace. A total of 71% of respondents said Japan should join the Treaty on the Prohibition of Nuclear Weapons, which entered into force this year, Tokyo Shimbun learned on July 31. Meanwhile, 85% of respondents said that Japan should participate as an observer in the first international conference of the parties to the treaty. A total of 41% of respondents said that Japan is either “very” or “somewhat” likely to go to war in the future, up 9 percentage points from last year’s poll. It is thought that the sense of crisis over the confrontation between the U.S. and China lies behind this rise.

A total of 67% of pollees said that nuclear weapons are likely to be used in war. Some 62% of those who would like to see Japan join the Treaty on the Prohibition of Nuclear Weapons gave as the reason for their answer the fact that Japan is the only country in the world to have suffered an atomic bombing. This suggests that there is a widespread view that Japan should fulfill its role as the only A-bombed country in the international community.

December will mark the 80th anniversary of the start of the Pacific War. Some 60% of those respondents who said that Japan may go to war in the future gave as the reason for their response that “Japan will be dragged in if a contingency were to arise between the U.S. and China with the heightening of the confrontation between those two countries.” Some 58% of respondents said that there is either little or absolutely no chance of Japan’s going to war. Some 55% of these respondents gave Article 9 of the Constitution as the reason for their answer. A plurality of 74% of respondents said that the Self-Defense Forces (SDF) must maintain its “exclusively defense” posture in line with the principle of pacifism in the Constitution. Meanwhile, only 21% said that Article 9 should be revised and the SDF designated as a “military.”

Asked how they learned about the Second Sino-Japanese War and the Pacific War, 46% said “from school studies and textbooks,” making this the most frequently given response. Some 13% said that they did not know that the Pacific War was triggered by the Japanese Imperial Army’s surprise attack on Pearl Harbor in Hawaii. Asked how the tragedy of war should be communicated to future generations, the most frequently given response was “taking down testimonies by video or writing.”

Since 1994, prime ministers have used such terms as “remorse” and “aggressor” at the annual Memorial Ceremony for the War Dead held on Aug. 15. Former Prime Minister Abe Shinzo, however, did not make such reference from the time of the launch of his second administration in 2012 through the end of his tenure in office last year. Respondents were split over whether Prime Minister Suga Yoshihide should make such references, with 47% saying that he should mention both “aggressor” and “remorse” and 49% saying that it is not necessary.

Some 57% of respondents said they do not support the Japanese government’s plan to relocate the U.S. military’s Futenma Air Station (Ginowan City, Okinawa Prefecture) to the Henoko district of Nago City, and 29% of this group said the base should be relocated outside Japan. Some 52% of respondents said there is no need to change Japan’s current policy on accepting refugees.

[Polling methodology: A total of 3,000 men and women aged 18 or over were randomly selected nationwide from 250 locations on a stratified two-stage random-sampling basis to create a cross-section of Japan’s slightly more than 100 million voters. On June 16, questionnaires were sent out by postal mail, and 1,952 completed questionnaires had been returned as of July 26. Valid responses were received from 1,889 people, excluding questionnaires completed improperly or by persons other than the intended voter. The valid response rate was 63.0%. The makeup of the polling sample was as follows: male, 50.4%; female, 49.6%. Sections of Fukushima Prefecture heavily impacted by the 2011 Great East Japan Earthquake were excluded from the survey pool.]