Missile units to be deployed on Ishigakijima island 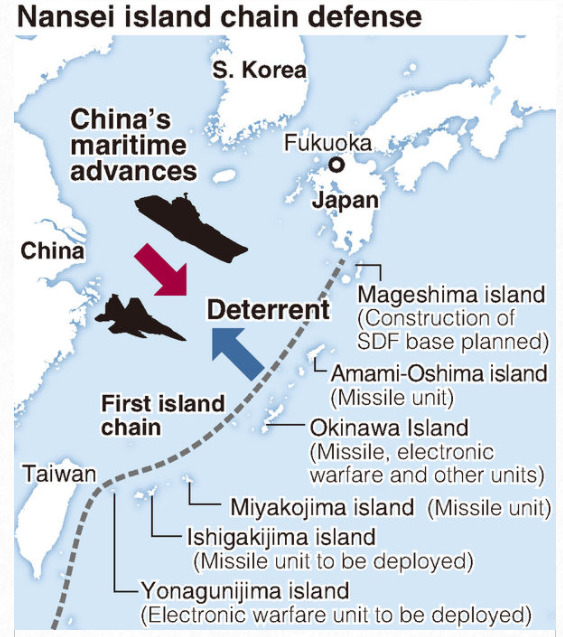 The Defense Ministry plans to deploy Ground Self-Defense Force missile units with 500 to 600 personnel on Ishigakijima island in Okinawa Prefecture by the end of fiscal 2022, sources said.

It will bring the total number of locations with missile units in the Nansei island chain to four, including the main island of Okinawa. The move is apparently eyeing China, which is strengthening its maritime presence.

According to the sources, one of the new units will operate surface-to-ship and ground-to-air missiles and another will handle the initial response phase in the event of a major disaster or armed attack.

The government will include expenses related to the deployment in the budgetary request for fiscal 2022.

New GSDF camps will be built on the former site of a golf course away from urban areas on Ishigakijima island. Housing facilities for GSDF personnel, an ammunition depot and a training ground will also be built.

The Nansei island chain spans about 1,200 kilometers, which is comparable to the length of the Japanese archipelago. It is located in the so-called first island chain that stretches to the Philippines.

China has formulated an anti-access and area-denial strategy to prevent U.S. forces from entering the island chain and is increasing its military activities in nearby sea regions, such as having aircraft carrier Liaoning pass between the main island of Okinawa and Miyakojima island.

In response, the Defense Ministry has been strengthening its defense capabilities in the region. With the new deployment, missile units will be stationed on four islands: Amami-Oshima island in Kagoshima Prefecture, and the islands of Okinawa, Miyakojima and Ishigakijima in Okinawa Prefecture.

Residents have opposed plans to station units in the municipality of Ishigaki and the issue was raised in the mayoral race in March 2018, but incumbent Yoshitaka Nakayama, who had effectively approved the deployment, won the election. In July of the same year, Nakayama officially announced his approval of the planned deployment.

The ministry is set to continue bolstering defense capabilities in the Nansei island chain.

In addition to the missile units, the ministry plans to deploy an electronic warfare unit on Yonagunijima island in Okinawa Prefecture by the end of fiscal 2023 and establish a new SDF base on Mageshima island in Kagoshima Prefecture.