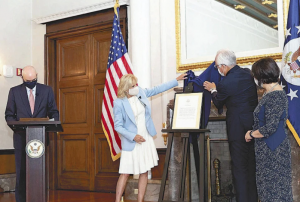 Yomiuri wrote that a room at the U.S. Ambassador’s official residence in Tokyo was dedicated to the late Hawaii Senator Daniel Inouye and his late wife Irene Hirano Inouye for their contributions to U.S.-Japan relations. First Lady Jill Biden, who was visiting Tokyo for the opening ceremony of the Olympics, attended a ceremony held on July 24 at the Ambassador’s residence where she dedicated the room to the Inouyes. Dr. Biden reportedly said at the ceremony that Sen. Inouye was a good mentor and a true friend of President Biden and Irene Hirano Inouye improved the status of Japanese American women.