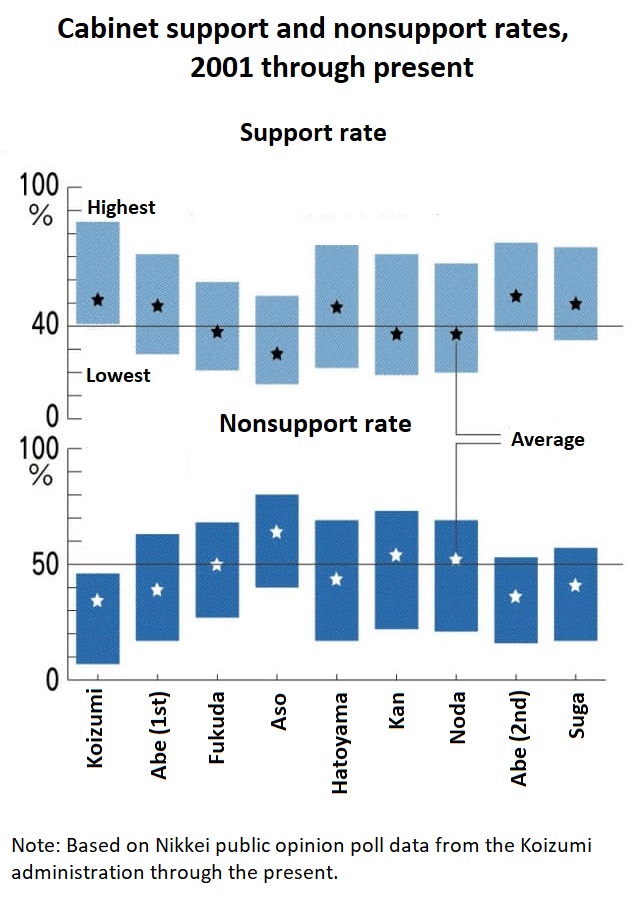 Media outlets conduct opinion polls via telephone or other means almost every month, and the Cabinet support rates found in the polls are of great interest as they indicate the strength of the administration. If a Cabinet’s support rate is sluggish for a long time, it can even lead to the resignation of the prime minister. What level of Cabinet support does an administration need in order to be stable?

The Nikkei looked into the Cabinet support and nonsupport rates of each administration since the Koizumi Junichiro administration, which was launched in April 2001.

Koizumi and Abe Shinzo (second administration from Dec. 2012) were the only two prime ministers who succeeded in building administrations that remained in office for over five years. What the two administrations share in common is a Cabinet support rate that did not drop below 40%.

The Koizumi Cabinet started with public backing of 80%. When Foreign Minister Tanaka Makiko was dismissed in January 2002, Cabinet support plummeted, reaching 43% in June that year.

When Koizumi made his unexpected visit to North Korea in September that year, however, his support rate rocketed to 61% in the October poll taken soon after his trip to Pyongyang.

Similarly, the second Abe Cabinet, which was launched in December 2012, enjoyed a support rate that hit the 30% level in only three of the 95 [Nikkei] surveys conducted during Abe’s tenure in office.

The three surveys were the July 2015 survey taken at the time of the deliberations on the security legislation, which would allow Japan to exercise the right to collective self-defense; the July 2017 poll, which was taken at the height of the Moritomo Gakuen and other scandals; and the June 2020 poll taken during a surge in COVID-19 cases.

The Cabinet support rate rebounded in 2015 and 2017 after Abe put together economic policy packages.

The first Abe Cabinet as well as those led by Fukuda Yasuo, Aso Taro, Hatoyama Yukio, Kan Naoto, and Noda Yoshihiko each lasted about one year, and each of these Cabinets saw support drop below 30%.

Why is it that 40% serves as a cutoff mark? In the Nikkei polls, an average of about 10% of respondents say either “not sure” or “don’t know” to the question “Do you support the Cabinet?”

Each media outlet uses a different methodology to ask pollees whether they support the Cabinet. To respondents who say they “are not sure” or “don’t know” whether they support the Cabinet, the Nikkei asks this follow-up question: “Which is closer to your view?” The responses to the follow-up question are then added to the responses to the initial question. This tends to make the Nikkei poll’s Cabinet support and nonsupport rates higher than polls where respondents who give noncommittal answers are not asked a follow-up question. 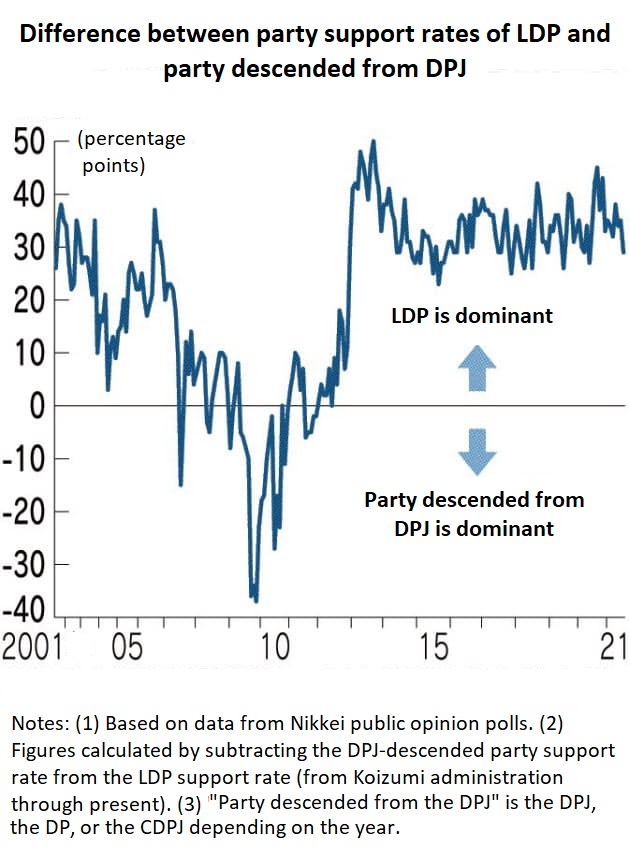 In the July poll, the Suga administration’s support rate was 34% while nonsupport was 57%. The support rate has fallen below 40%, but the party support rate for the LDP is slightly under 30 percentage points higher than that of the CDPJ.