Aso has no choice but to work with Nikai 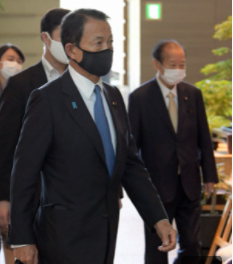 In late June, Deputy Prime Minister and Finance Minister Aso Taro was puzzled when Prime Minister Suga Yoshihide told him that Tanahashi Yasufumi of the Aso faction (53 members) will be appointed chairman of the National Public Safety Commission. This is because Aso was planning to nominate someone from his faction to replace Okonogi Hachiro who had resigned from the post to run for the upcoming Yokohama mayoral election. When Suga heard about Aso’s puzzlement later, he grumbled, “I appointed Tanahashi out of consideration for Aso.” This symbolizes the incompatible relationship between Suga and Aso.

During the Abe administration, it was rumored that Suga and Aso didn’t get along. One of Aso’s aides says, “Even now, Aso doesn’t truly appreciate Suga from the bottom of his heart.” Nevertheless, Aso frequently visits to the Prime Minister’s Office to offer Suga advice on diplomacy, which is regarded as Suga’s weak point. This is because Aso himself has a limited number of cards in his hand.

The Aso faction includes Minister in charge of Administrative Reform Kono Taro, who is often selected as the top choice for the next prime minister in public opinion polls. There is, however, an unfavorable view of Kono, who has advocated radical reforms in the past, such as abandoning nuclear power generation, etc. Referring to the confusion caused by the supply of the COVID-19 vaccines under Kono’s management, a senior official of the Aso faction criticizes Kono, saying, “He lacks the coordination skills to protect the administration.” In other words, for Aso, the “Kono card” is premature.

On the other hand, Fumio Kishida of the Kishida faction, which shares origins with the Aso faction, has not gained much influence within the LDP and is not reliable enough for Aso to trust Kishida with the Aso faction’s future. In this way, Aso lacks a card and he has no choice but to team up with former Prime Minister Abe Shinzo, who wields influence in the 96-member Hosoda faction, the largest faction in the LDP, and remain among the mainstream factions supporting Suga.

Aso and his ally, Abe, “keep in close contact and constantly coordinate their statements and actions,” according to an aide to Aso. During a fund-raising party for the Aso faction in April, Aso mentioned Suga, saying, “We will prepare for the upcoming Lower House election under the leadership of Prime Minister Suga.” In May, Abe followed suit, announcing his support for Suga’s continuation as prime minister.

However, Aso’s maintaining the status quo also means that he may, however reluctantly, need to continue to work with Secretary-General Nikai Toshihiro whom Suga relies on. Nikai has been acting as Suga’s guardian. If Aso can remove Nikai from his post as secretary-general, the Aso faction will become the “true mainstream,” but there is no sign of that happening.

Amari Akira, a member of the Aso faction, launched the parliamentary league for the promotion of the semiconductor strategy, with Abe and Aso as its top advisors, apparently trying to increase the influence of the Aso and Abe faction, but it only resulted in deepening the rift with Nikai.

And Nikai has recently been exploiting Aso’s weakness. This is the issue of the reinstatement of former National Public Safety Commission Chairperson Matsumoto Jun, who left the LDP and became an independent after visiting a club in Ginza, Tokyo, during a state of emergency. Before leaving the party, Matsumoto was Aso’s right-hand man in the Aso faction. One official of the Aso faction said, “No one could work as loyally as Matsumoto to satisfy Aso’s needs.” Matsumoto is considered indispensable for the faction to survive the expected fluid situation after autumn.

According to an LDP survey, Matsumoto is expected to face an uphill battle even if he runs as an independent in the upcoming Lower House election. In order to win a seat in proportional representation , it is essential for him to return to the LDP and run a double candidacy [both single-seat constituency and proportional representation]. Aso told his aides, “We have to help him somehow.” But it is difficult to have Nikai and others agree, partly because the COVID-19 pandemic continues.

Aso, who once said he will continue to be a lawmaker until he turns 85, which is the age at which his grandfather and former Prime Minister Yoshida Shigeru retired. Nikai is two years older than Aso. “If one of them retires, the dynamics within the LDP will change drastically,” a veteran LDP lawmaker predicted. With the LDP in the midst of a generational change, the two elders continue to fight a battle of nerves.