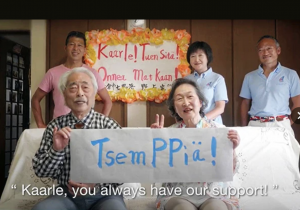 Kyoko Nogami, right in front, sends an encouragement video message to Kaarle Tapper, a member of the Finland’s sailing team competing at the Tokyo Olympics. (From YouTube)

KAMAKURA, Kanagawa Prefecture–As she held up and stared at a flower bouquet, an ecstatic Kae Yamauchi shared a special moment in the life of an Olympic medalist.

The bouquet was a special present sent to Yamauchi, 48, a resident here, as a token of appreciation for her family’s hospitality.

The Yamauchis served as a host family for Hermann Tomasgaard, a member of the Norwegian sailing team, in summer 2019.

Tomasgaard won a bronze medal in the men’s one-person dinghy laser event on Aug. 1 and received the bouquet on the podium.

“It was a surprise. I am very happy,” Yamauchi said of the flowers adorned with the Tokyo Olympic logo.

She said she will preserve the bouquet as a precious keepsake.

Since it is crucial for sailors to master the waves and the direction of the winds, many foreign sailors such as Tomasgaard have visited the area for more than three years leading up to the Tokyo Olympics.

Most of them have home-stayed at local residences while training for a month or so.

More than 30 local families in Kamakura have hosted more than 50 sailors.

Despite the COVID-19 pandemic, these host families have stayed in touch with the athletes, cheering them on remotely.

Tomasgaard and the Yamauchis were one of those who have formed a special bond, exchanging messages.

After the race, he thanked her and said the family had provided mental support for him, Yamauchi said.

The sailing competitions were held from July 25 through Aug. 4.

Yamauchi and Tomasgaard could not meet each other in person because of the pandemic.

But when they can, they will share their memories to make up for the loss, she said.

Kyoko Nogami, 79, who lives in the city’s Shichirigahama area, hosted Kaarle Tapper, a member of the Finland’s sailing team.

His favorite meal was rice topped with soy sauce. Nogami remembers Tapper enjoying it at the end of every meal.

Nogami does not speak English. But she communicated with gestures and treated him like her son, she said.

She wished she could have cheered him on at the venue. But that was not possible due to the pandemic.

So she made a video for Tapper with a message of encouragement in Finnish.

“I wanted to tell him that I always wish him happiness even though I cannot be cheering for him at the venue,” Yamauchi said.

Kyota Kawabe, 51, is behind the idea of making and sending videos of support to Tapper and other sailors.

Kawabe hosted a foreign sailor in fall 2016. He has called on other residents to become host families since then.

In March this year, Kawabe came up with an idea of making such a video.

As he started contacting foreign sailors, he realized some were worried about the mood and public sentiment in Japan over the holding of the Games.

“Are we still welcome there?” a sailor asked. Another asked, “What do the Japanese people think about the (Games)?”

Kawabe thought the video would provide them with a boost and eliminate concerns. He launched the “Welcome Sailors Project.”

He called on Nogami and other host families to join the project, as well as local kindergarten children.

After editing their messages, Kawabe posted the video on YouTube.

He also made a video of a virtual tour of Kamakura with sightseeing spots and cultural practices, hoping athletes would enjoy watching it while under COVID-19 restrictions.

Since May, he has made about 30 such videos.

It meant a lot for her to feel welcomed and receive their support, she said.