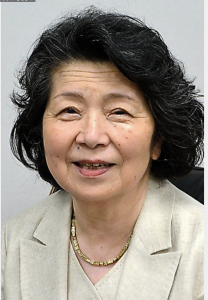 The Grand Bench of the Supreme Court recently handed down a ruling that the current legal system that doesn’t recognize a marriage between two people with different surnames is constitutional. The Court had issued the same ruling on the issue in 2015. The ruling constitutes a message from the Court to the Diet that it is the Diet’s job to design an appropriate system. Is it the Diet, or the Court, that will ultimately decide the issue of dual surnames? And whose turn is it now to continue the conversation on the issue?

A warning : “Not discussing the issue of dual-surnames is unconstitutional.”

The Asahi Shimbun: Since 2015 this is the second ruling upholding the constitutionality of the current system.

Sakurai: The ruling came as no surprise. It’s only been a few years since the last ruling on the same subject. Once a ruling is made, the legal precedent is rarely overturned. During the period I served as a justice, 18 years was the shortest period it took to overturn an earlier ruling and decide an issue to be unconstitutional. The issue in question was a legacy of discrimination against a child born outside of wedlock. Furthermore, in the dual-surname case, three justices who had upheld the constitutionality of the system in the previous ruling also sat on the bench this time.

Asahi: The Supreme Court is said to have passed the ball to the Diet. The same was true in the case of the previous ruling. Do you think the legislative branch realizes it now has the ball?

Sakurai: In lawsuits concerning electoral constituencies and disparity between values of votes, earlier rulings upheld the constitutionality of the system. At one point, however, this changed and the Court began concluding the situation didn’t align with the Constitution. The Supreme Court can only decide “if systems and laws enacted by the Diet are in violation of the Constitution.” That is why the Court is warning the Diet that “although the Diet has discretionary power over the issue, it will soon become unconstitutional if no initiative is taken to review the system.”

I remember a chief justice who described this [exchange of messages] as, “We are playing catch [with the legislative branch].” I felt that the recent ruling is also a message.

Asahi: There has been no real discussion on the issue [of dual surnames] in the past five years. Do you think it’s going to be different this time?

Sakurai: The key is how you send the message to the other branch. The last time, the Court turned away from the issue, basically saying, “The government should deal with this.” This time, the Supreme Court ruling contains a strong message demanding the government “exercise its discretionary power without fail.”

For example, the majority opinion that upheld the constitutionality of the government position wrote that there are two separate issues that are of different natures—“what kind of system is desirable” and “what if the current system is unconstitutional.” I believe the Court wanted to clarify that it is the Diet’s job to craft a desirable system.

Asahi: The government might see the two rulings that upheld the constitutionality of the current system as official approval of its position.

Sakurai: Japan’s current Civil Code was last revised in 1947. The legal basis of the same surname for a married couple is found in Meiji Era Civil Law. It’s extremely old. As Japan’s sole legislative body, the Diet is responsible for reviewing laws so that they keep up with changes in society. The inaction of the Diet might be determined as “failing to appropriately exercise its discretionary power” and could be ruled unconstitutional.

I took the Court ruling to mean that a decision on unconstitutionality could be handed down if the Diet fails to discuss the issue, as it would indicate failure to appropriately exercise its discretionary power. The issue should be openly discussed on the Diet floor instead of at a party meeting or within parliamentarians’ leagues.

Asahi: What kind of “the changes in society” do you have in mind?

Sakurai: I expect that the current system will reach its limit as more women join the workforce, more people go by names they are commonly known by, and divorce and remarriage become more common. At that point, I believe it will be decided that the significance of rights and benefits lost by the denial of dual surnames would surpass the benefit of maintaining the integrity of the system by only allowing the same surname. I believe the Supreme Court ruling indicates that when various factors, such as petitions from local assemblies and UN recommendations, coincide and create a different environment, the current system could be ruled “unconstitutional when the entire situation is taken into consideration.”

Asahi: I believe that it’s a matter of personal dignity and of the human rights of individuals for people to be able to change their names. Still, do you think that we must wait for the “situation to change” until “the limit” is reached?

Sakurai: Ruling on the constitutionality is a balancing act, where Justices must consider the nation as a whole on one hand and the rights and benefits of individuals on the other. So far, there hasn’t been sufficient understanding among the Japanese people as to why it is disadvantageous for couples to have to share the surname in a marriage.

Fifteen years ago, at the time of the first ruling, the Supreme Court justices didn’t seem to have a clear idea why dual surnames are preferable for some people. I explained that I myself had built a career while using my maiden name. Two other female Justices had their own personal feelings about the issue. Even when I tried to clarify for other justices that changing one’s surname is disadvantageous and that it was unreasonable to be forced to do so, many of them just ended the conversation with: “But you and your spouse made the decision when you got married.”

In the recent ruling, the comparatively younger justices were of the opinion that the current system is unconstitutional. The values of the bench will change when more young justices join it. I expect that in three to four years, the Supreme Court will hand down a ruling that will be different from the recent one.

Asahi: Is it justifiable that the decision of the court depends on values held by individual justices?

Sakurai: The truth is that rulings on issues of this nature can only depend on the values of justices. The Supreme Court adjudicate on a variety of issues covering a wide area. Ultimately, each justice must rely on their own value system.

Sakurai Ryuko was born in 1947 and in 1970 entered the now-defunct Labor Ministry where she worked on the Child Care Leave Law among other legislation. Sakurai became the third female justice of the Supreme Court in September 2008. She retired in January 2017.