TOKYO — Kansai International Airport, in western Japan, is undergoing a major renovation to welcome more foreign tourists ahead of Osaka’s hosting of the World Expo in 2025. The airport’s operator says the 70 billion yen ($635 million) project is “what the Kansai region needs,” despite the heavy blow from the COVID-19 pandemic.

Benoit Rulleau, co-CEO of the airport’s operator, Kansai Airports, told Nikkei Asia in a recent interview that increasing capacity for international passengers to 40 million — nearly double the number who used the facility in the fiscal year through March 2020 — will meet demand arising from the global gathering, which the organizer believes will draw around 28 million visitors through the six months of the World Expo.

“KIX [Kansai International] is a destination airport, and we are happy to serve tourism for Osaka and surrounding prefectures as a gateway for Kansai,” Rulleau said, explaining that its local-international strategy differs from that of global hub airports, which serve as transit points sending passengers to their final destination.

Kansai Airports, a joint venture between Japan’s Orix and France’s Vinci that has been operating the facility since 2016, broke ground on the makeover of Terminal 1 in May. Aiming to enlarge areas for international flights and shrink those devoted to domestic ones, the operator seeks to return to the pre-COVID emphasis on serving international flights, particularly those carrying Asian tourists. Chinese and South Korean passengers together accounted for 57% of all foreign passengers passing through the airport in 2019.

While Rulleau argued Kansai Airport will need to diversify its international flights to reduce “political risks,” he also acknowledged that delays in the return of Chinese travelers, the world’s biggest-spending tourists before the pandemic, would hurt “economy in Kansai as well as in Japan.”

That seems likely, as some analysts, including the Economist Intelligent Unit, believe Beijing will not relax quarantine requirements for tourists returning from overseas until late 2022 — first for travelers returning from Hong Kong and Macao, followed in 2023 by other countries. 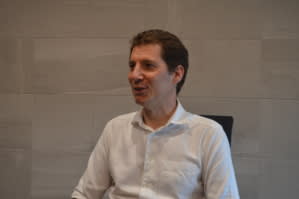 “KIX [Kansai International] is a destination airport, and we are happy to serve tourism for Osaka and surrounding prefectures as a gateway for Kansai,” said Benoit Rulleau, co-CEO of Kansai Airports. (Photo by Koki Izumi)

In fiscal 2019, domestic passengers at Kansai Airport made up 23% of total volume. When it opened in 1994, the plan was to close nearby Osaka International Airport, also called Itami Airport, due to the noise, making Kansai, which was built on an artificial island nearly one hour by train from the center of Osaka, a regional hub. Kansai Airport Terminal 1 was designed on the assumption that 12 million international passengers and 13 million domestic passengers would use the facility every year.

It was later decided to keep Itami Airport open to serve domestic flights, and Kansai Airport is now the only international airport in the Kansai region.

The renovation, however, comes as COVID-19 batters travel demand. For the fiscal year through March, passenger traffic was down 92% on the year, with international passenger numbers declining 99%. Kansai Airports’ Rulleau expects fewer business travelers even after the pandemic subsides, but “demand for leisure will come back as people need mobility.”

Through the renovation, which is due to be completed in time for the Expo, Kansai Airports will “also change the way of operation,” said Rulleau, promoting the use of fast travel with technologies such as self-service check-in and bag drop facilities, and smart lanes to shorten waiting times for passengers. 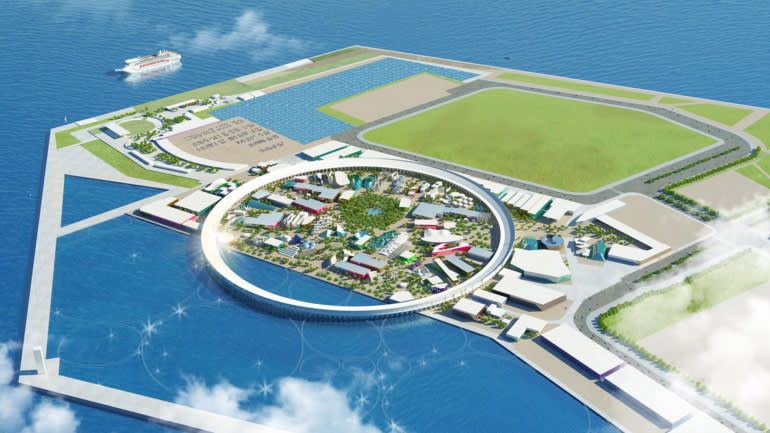 An artist’s rendering of the World Expo 2025 venue. (Photo Courtesy of Japan Association for the 2025 World Exposition)

In October, Kansai Airports will also introduce an operational database — the first of its kind for a Japanese facility but already introduced at other airports operated by Vinci, such as in Cambodia. The system functions as a central database for all operations systems, optimizing flight management to smooth departures and arrivals.

The database also allows earlier check-ins and baggage storage, which is expected to encourage passengers to buy duty-free goods. “We seek to catch up with international standards,” said Rulleau.

Osaka has led Japan’s inbound tourism over the last decade. The western prefecture was the most-visited leisure destination among foreign tourists in 2019, hosting 43.4% of overseas arrivals, topping Tokyo’s 42.4%, according to the Japan National Tourism Organization. The region boasts the bright lights of Osaka, the ancient capital of Kyoto and beautiful natural scenery, giving foreign visitors a variety of experiences to enjoy.

Japan Tourism Agency data shows that foreign tourists accounted for 18% of Japan’s total tourism spending. Overall, Japan’s tourism industry relies heavily on domestic travelers. In Osaka, by contrast, international tourists made up 46.2% of the total in 2019.

Osaka is a strong candidate for Japan’s first “integrated resort,” centered on a casino, which is expected to pull in more overseas visitors. In July, U.S. casino giant MGM Resorts International and Orix pitched an idea to the local authorities for a $9 billion resort on the same artificial island that will serve as the World Expo venue. The resort is now scheduled to partially open in the second half of 2020s, following pandemic-related delays.