TOKYO — A U.S. initiative for a digital trade agreement to deepen ties with Asian economies faces an uncertain outcome as some countries in the region fear provoking a confrontation with China, which sees the deal as an attempt to encircle it.

Nations should “work for a digital business environment that is open, fair and non-discriminatory,” Xi said in a prerecorded speech played at the online summit of leaders from the 21-member Asia-Pacific Economic Cooperation bloc on July 16. “Exclusion, confrontation and division would only lead to a dead end,” he said.

Washington’s proposal includes Japan, South Korea and nations from Oceania and Southeast Asia in a pact meant to ensure free exchange of digital information. Notably excluded from this list is China.

Foreign Ministry spokesperson Zhao Lijian on July 13 called the idea a “plot to gang up against China and contain its development and obstruct the common development of countries in the region.” Zhao said such a plan was “doomed to fail.”

Some had expected U.S. President Joe Biden to explain the idea at the APEC leaders’ summit, but he made no clear reference to any agreement. The U.S. initiative carries both economic and political objectives.

The economic goal is to develop rules for the digital sector spanning areas such as cross-border data flows, privacy protection and the use of artificial intelligence. As innovation produces ever greater volumes of data and content to exchange, the agreement would create a foundation for a digital space that allows companies operate more smoothly.

Similar rules are included in the U.S.-Japan Digital Trade Agreement, which took effect in 2020, and in an agreement signed by Singapore, New Zealand and Chile last year. The Biden administration sees these existing pacts as a model for the new one, which will engage more nations and eventually morph into a prosperous economic zone built on the free flow of information, trade officials say.

The idea also serves the political objective of gathering like-minded countries to stand up to China. An agreement on free digital trade would naturally set apart China, where the state wields greater control over data and would serve as a catalyst for unity among liberal economies.

Unlike predecessor Donald Trump, who favored unilateral action, Biden has emphasized cooperation with like-minded countries. His administration’s tactic of deploying frameworks for multilateral cooperation to counter China is symbolized by the Quadrilateral Security Dialogue, or Quad, which consists of Japan, the U.S., Australia and India. A broad-based digital trade agreement also fits that thinking. President Joe Biden views digital trade agreements as a way to boost services and small businesses without drawing the ire of manufacturers and blue-collar workers.   © Reuters

The U.S. has pivoted to the digital sphere partly because of domestic opposition to traditional trade agreements that focus on goods. Blue-collar frustration with the decline of American manufacturing formed the undercurrent to Trump’s decision to withdraw from the Trans-Pacific Partnership trade agreement. Without the U.S., that deal became the 11-nation Comprehensive and Progressive Agreement for Trans-Pacific Partnership.

Facing the same ingrained skepticism toward pro-corporate policies that fueled globalization, Biden has embarked on a “foreign policy for the middle class.” Simply returning to the Pacific trade deal would risk sparking a backlash from the American public.

A digital trade agreement, which mainly covers the services sector, can meet this end, while avoiding a backlash from the manufacturing industry. With such an agreement, the Biden administration can also emphasize the benefit of helping smaller businesses through new channels such as online sales — a move that will benefit ordinary Americans.

The U.S. would be “starting something that we can clearly demonstrate affects and supports small- and medium-sized firms in the United States, working people,” Kurt Campbell, the National Security Council coordinator for the Indo-Pacific, said during a recent online event.

To what extent Washington can bring other countries on board remains to be seen. Those that follow the U.S. should anticipate pressure from China.

“Japan and Australia will actively support it, but South Korea and Southeast Asian countries may take a wait-and-see attitude,” a Japanese trade official said.

Cajoling countries caught between China and the U.S. to make a choice could end up sapping the cohesive power of the agreement. 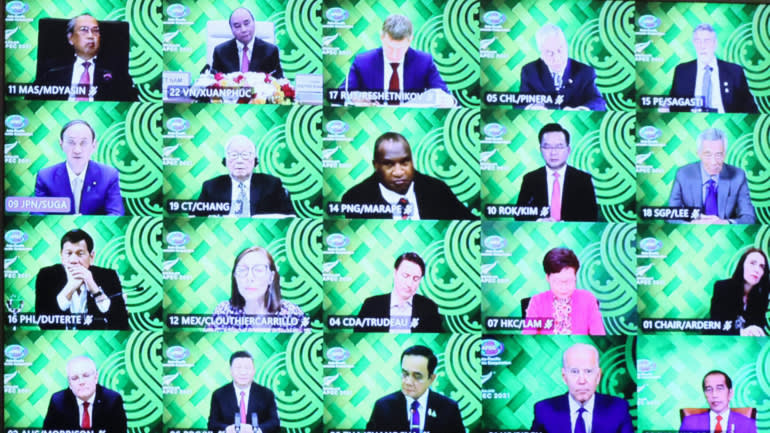 The leaders summit of the 21-member Asia-Pacific Economic Cooperation, held online July 16. Debate on the digital trade pact is expected to continue at the next meeting in the fall.   © Kyodo

The Biden administration also faces domestic challenges. Services account for more than 30% of U.S. exports. But much of this value stems from content such as movies and music, as well as business support services. The benefits for blue-collar workers and other ordinary Americans of expanding this trade are hard to see.

U.S. tech giants, which look to Asia’s promising markets, are hungry for a deal. The proposal may lose support if it is seen as favoring big business.

Some observers describe tensions within the Biden administration. Key officials in the State Department and National Security Council are keen about the initiative to keep China in check, while those in the Office of the U.S. Trade Representative want to consider public opinion and the reaction of Congress.

Debate is expected to pick up as the APEC summit this fall approaches.