Independents consistently make up over 30% of opinion poll respondents 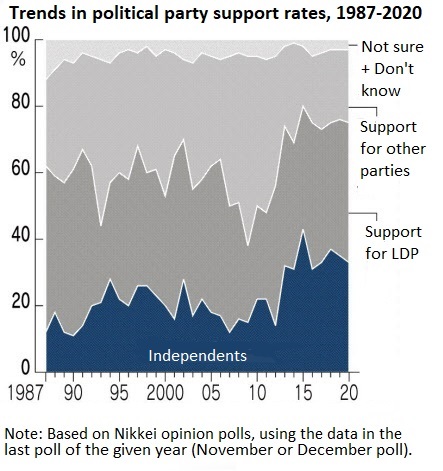 Since late 2012, more and more survey respondents have been reporting that they do not support a particular political party, according to the Nikkei public opinion poll. Known as “independents,” this group made up 35% of all pollees in the July 2021 survey. Independents have made up more than 30% of all pollees more frequently since the launch of the second Abe administration in [December] 2012.

The Nikkei looked at trends in independents since 1987 when the Nikkei started to conduct regular opinion polls.

Two key shifts in independents were noted. The first was in the 1990s. The Liberal Democratic Party (LDP) fell from power [in 1993] after a series of “politics and money” scandals. Having come to distrust politics, more pollees reported that they did not support any political party, and the term “independents” started to be used often.

The next shift was in 2012 with the change in administration.

The DPJ split over the consumption tax hike, and the period under the DPJ became known among critics as the “years of indecision.” This image continues to plague the political parties descended from the DPJ. Since December 2012, it is very likely that a certain percentage of people who did not support the LDP became independents. 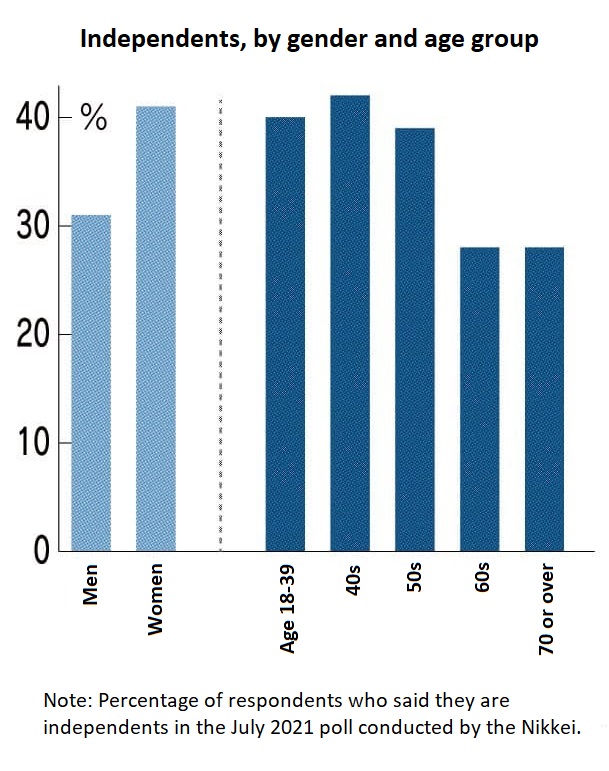 In the July 2021 poll, there was a striking gap by gender in the percentage of people who said they do not support a political party. Women outpaced men by a full 10 percentage points, with 31% of men and 41% of women describing themselves as independents.

In support for the LDP, the gender gap was 5 points, with 40% of men and 35% of women saying that they back the LDP. Similarly, 11% of male respondents and 6% of female respondents said they support the CDPJ. When the LDP or other main party cannot gain support among women, this population shows up as “female independents.”

In the July 2021 poll, 15% of independents said they support the Cabinet, while 70% said they do not. If the Cabinet support rate among independents remains low, it will be a risk factor for the LDP. If independents, who now make up one in three voters, join together and cast protest ballots against the ruling parties in the Lower House election to be held by this autumn, the LDP will be in trouble. On the other hand, if the opposition parties do not appear to be a viable option, it may stoke voter distrust in politics and simply result in a low turnout rate in the end.