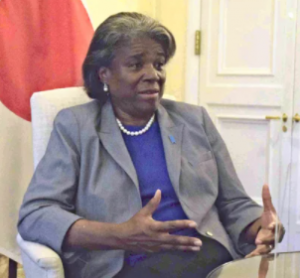 Monday’s Yomiuri ran its one-on-one interview with U.S. Ambassador to the UN Linda Thomas-Greenfield, who represented the United States at the closing ceremony of the Tokyo Olympics on Sunday. The paper wrote that the U.S. envoy reportedly told the paper at the U.S. Ambassador’s official residence in Tokyo on Sunday that the Olympic Games held amid the COVID-19 pandemic symbolized the resilience of the Japanese people. The Ambassador reportedly added that although there were various opinions about the GOJ’s decision to host the Olympics amid the pandemic, the Games achieved great success by overcoming adversity. Concerning whether the United States will send a delegation to the Beijing Winter Olympics to be held in February 2022, Ambassador Thomas-Greenfield criticized China’s oppression of the Uyghurs and the pro-democracy activists in Hong Kong and reportedly said it is necessary for China to decide by itself how to face these issues.

Saturday morning’s Mainichi ran a Kyodo News report from New York on remarks made on Thursday by Ambassador Thomas-Greenfield during a teleconference with a group of Japanese media outlets including Kyodo News. The report said Ambassador Thomas-Greenfield hailed Japan’s efforts to host the Olympics amid the coronavirus pandemic and with the aim of showcasing the recovery from the 2011 Great East Japan Earthquake, saying that the efforts are a testament to the Japanese people’s resolve to overcome great adversity. She said she is grateful for the efforts made by the government and people of Japan to host the Games, adding that Japan should be proud that it has overcome great adversity to stage the Tokyo Olympics. The report also said that Ambassador Thomas-Greenfield is planning to meet with the Refugee Olympic Team during her stay in Japan as the first U.S envoy to do so. Noting her experience in refugee issues, the envoy said she is excited about the opportunity to meet the refugee athletes.

Saturday’s Nikkei wrote that Ambassador Thomas-Greenfield said in the group interview with Japanese media outlets that the United States is open to considering additional ways to facilitate humanitarian assistance to North Korea as quickly as possible.