SEOUL/TOKYO — When Japan two years ago imposed tighter controls on exports of semiconductor materials to South Korea, it shook supply chains across the two countries and made Seoul realize that an excessive dependency on Japanese products came with risks. South Korea thus began pushing to become self-sufficient in high-tech chip materials.

But so far South Korea’s efforts to cut its reliance on Japan-made materials have not progressed as much as the government says they have, and trade statistics show the economies’ interdependency.

At an event on July 2 to mark the second anniversary of South Korea’s response to Japan’s “unfair” export controls, President Moon Jae-in said the country has become more self-sufficient in high-tech materials. He also called the sudden imposition of the restrictions a “surprise attack.”

In his eight-minute speech, Moon stressed that South Korea has successfully made itself less reliant on Japan for three high-tech semiconductor materials — hydrogen fluoride and EUV (extreme ultraviolet) photoresists, both used in making circuits, and fluorinated polyimide, which is used in organic light-emitting diode panels for smartphones.

In July 2019, Japan tightened controls on South Korea-bound exports of these materials, requiring them to undergo separate screenings before shipping. As Moon said, South Korea’s reliance on Japan for hydrogen fluoride has declined. Exports by Japan’s Stella Chemifa and Morita Chemical Industries have dropped as most Japan-made hydrogen fluoride has been replaced by domestic products from companies such as Soulbrain, partially owned by Samsung Electronics, and SK Materials.

The country’s imports of EUV photoresist from Japan have also declined, as imports from Belgium have jumped more than tenfold in value terms since July 2019.

“We have become less dependent on Japan [for EUV photoresists] thanks to growing imports from Belgium,” a South Korean government official said.

But the figure is a bit deceiving: The photoresists are made by a Belgium unit of Japanese materials maker JSR.

Overall photoresist imports from Japan last year actually rose 22% to $328.29 million, then increased 3% year-on-year in the first six months of 2021. Japanese products still account for over 80% of total imports. 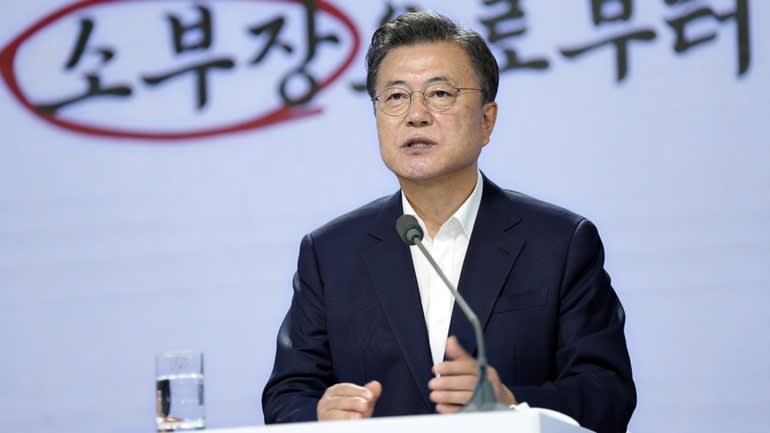 The widest gap between Seoul’s claims and reality can be seen in the fluorinated polyimide numbers. The South Korean government said the country has adopted “ultrathin glass” as an alternative to Japanese products, reducing imports from Japan to “virtually zero.”

Samsung uses ultrathin glass for its foldable smartphones. But of the company’s nearly 300 million smartphone shipments in 2020, foldable models accounted for 4.4 million, a little more than 1% of the total, according to a local securities company. Many smartphones still use fluorinated polyimide.

Imports of fluorinated polyimide from Japan grew 15% year on year, to $44.3 million, in the first six months of this year, with the share of Japanese products more or less unchanged.

Although Moon stressed that South Korea’s reliance on Japan for 100 core items has fallen from 31.4% to 24.9% over the past two years, Seoul has not disclosed what the 100 products are. One government official said the list is a “national secret.”

South Korea’s biggest trade deficit is with Japan; it even outsizes that with oil exporter Saudi Arabia. The country’s trade deficit with Japan widened by 9% to $20.9 billion in 2020 and by 31% in the first six months of this year due to an increase in imports of chipmaking equipment.

These statistics show that South Korea’s dependency on Japanese products has not changed much, contrary to Seoul’s claims. Still, the country could achieve a serious long-term reduction in Japanese imports.

South Korean chipmakers are bigger buyers of materials and equipment than their Japanese rivals thanks to their sheer size. Samsung racks up annual sales of roughly $90 billion from chips and displays, while SK Hynix and LG Display rake in a combined $50 billion. In contrast, Kioxia Holdings, Japan’s biggest chipmaker, posts annual sales of about $11 billion.

Tokyo’s export controls have prompted Samsung and other South Korean chipmakers to realize the risk of supply chain disruptions. To keep their lines open, South Korean chipmakers requested their Japanese suppliers to boost production in South Korea. In response, Tokyo Ohka Kogyo and Daikin Industries, among other companies, have begun taking action to expand production in the country. These moves could result in deindustrialization and job losses in Japan. The Japanese government seems to be paying little attention to these developments. The Ministry of Economy, Trade and Industry showed little sense of crisis in a report compiled in June, simply acknowledging that there are some concerns about the hollowing-out of Japan’s chipmaking equipment and materials industries.

“The ministry has no idea about the real consequences of Japan’s export controls imposed two years ago,” said an executive of a leading Japanese chip materials maker.

Over the years, Japan has supplied materials and equipment to South Korea, and South Korea has produced finished products, including chips, displays, smartphones and TVs. That mutually beneficial division of labor remains, but if Japan continues its political spat while overlooking its neighbor’s ongoing structural change its companies will pay a heavy price. Japan also insisted security concerns necessitated the new rules. South Korea also interpreted them as an attack on its core industries and retaliation for the wartime laborer ruling.

Soon after Japan introduced the curbs, then trade minister Hiroshige Seko said, “South Korea’s recent moves [regarding wartime laborer and other issues] have undermined the long years of trust and friendly relations between the two countries.”

Unwilling to change their views, the two countries’ leaders have failed to narrow their differences.

Soon after Japan announced the restrictions, boycotts of Japanese products began to spread in South Korea. Then in August 2019, Seoul said it would terminate a military-intelligence sharing pact with Japan, formally known as the General Security of Military Information Agreement. A month later, South Korea filed a complaint with the World Trade Organization. The issue of compensation for former “comfort women” further hampered relations between the two countries.

Efforts to improve ties have yet to bear fruit. Moon’s planned visit to Japan in connection with the opening ceremony of the Tokyo Olympics on July 23 did not materialize. A senior South Korean government official said preliminary discussions did progress but that the two countries still could not agree to hold the summit.

South Korea is scheduled to hold a presidential election in March. The election could become a big turning point for semiconductor supply chains in both countries. If the next administration continues Moon’s self-sufficiency policy in high-tech materials, South Korean companies could use five years’ worth of government subsidies to hone their technology.

In South Korea, government policies shift significantly every time a new president takes office. Japanese chipmakers are paying close attention to whether Moon’s successor will continue the president’s tough stance toward Japan and his made-in-Korea drive for high-tech materials.