Where is Japan’s COVID hot spot? In Tokyo, 60% infected at home

TOKYO — When her husband came down with COVID-19 last month, a Tokyo woman in her 30s was stymied by the instructions she received for at-home treatment from the local health bureau.

She was told to eat, sleep and spend time away from her husband as much as possible — no easy task in their one-bedroom condominium. Three days after this advice, she tested positive for COVID-19 herself.

The woman’s story reflects a feature of Tokyo’s latest coronavirus wave: Officials reported Thursday that 61% of new infections in the week to Aug. 2 could be traced to the home. At-home infections had never topped 60% in previous waves.

“There was no way we could use separate bathrooms,” said the woman, who asked to remain anonymous. “I just had to resign myself to the fact that I would probably get infected.”

Her husband’s symptoms were mild, mainly a cough. With hospitals under strain, and the government urging a limit on admissions in some areas to only high-risk cases, a fast-growing number of Tokyo coronavirus sufferers like him have been forced to recover at home. If one person in a household is infected by the highly contagious delta variant, “it’s safe to say that almost everyone will be infected,” said a member of the Japanese government’s coronavirus advisory panel. Simply using different rooms and dishes provides unclear protection against the virus in such circumstances.

Tokyo on Friday recorded 4,566 new COVID-19 cases, topping 4,000 for the fourth day in a row. According to public broadcaster NHK, a Tokyo woman in her 50s died after recuperating at home, in the first such death during the current wave of infections.

Isolating at a hotel or other lodgings that take in coronavirus patients is a better option for preventing the spread at home, experts say. Patients there can more easily receive an antibody cocktail that has shown signs of preventing COVID-19 cases from worsening. This intravenous treatment is difficult to administer at home.

Tokyo has made less progress than other parts of Japan, notably Osaka, in expanding the use of lodgings for COVID-19 treatment. The Japanese capital has secured about 6,000 of these rooms, but only 2,940 are ready to accept patients. As of Friday, just 1,815 patients were using such lodgings, compared with about 18,000 recuperating at home.

Officials said that some of the 6,000 rooms are used to accommodate nurses or store equipment. The time it takes to disinfect rooms also limits how soon they are available for new patients. Increasing the overall number of rooms is difficult because more nurses are needed, officials said.

By contrast, Osaka Prefecture had 2,301 COVID patients in lodgings, with 5,119 people recovering at home. Osaka set aside more lodging capacity than the during the previous wave, when 19 homebound people infected with COVID-19 died in Japan’s western metropolis.

“We want to be guiding people to treatment at lodgings, not at home,” Gov. Hirofumi Yoshimura has said. 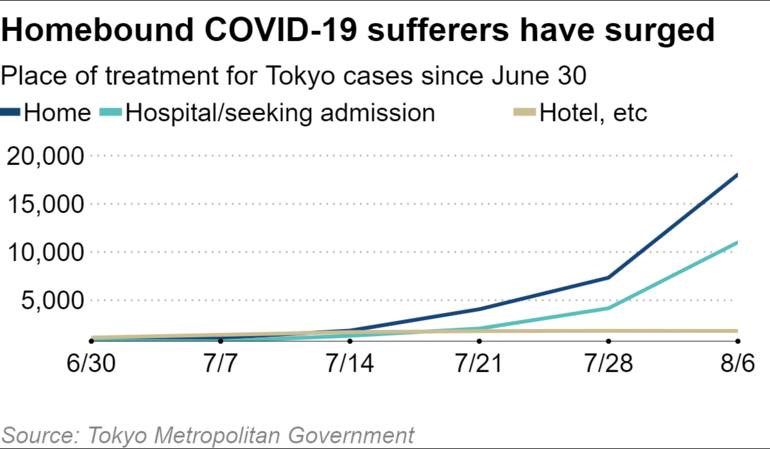 Nationwide, 45,269 people infected with coronavirus were recuperating at home as of Wednesday, 11 times the number on June 30, according to the Ministry of Health, Labor and Welfare. Another 17,235 were undecided while they sought other options, nearly eight times the earlier level.

“It’s important for hospitals to divide their functions based on symptoms and coordinate with each other,” said Kaoru Nagahori, head of Yokosuka Kyosai Hospital near Tokyo.

“While it may be hard to increase the number of beds significantly, a local-government-led approach to allocate patients smoothly can make it possible to admit more people,” Nagahori said.

For the Tokyo woman who became infected with her husband, home was the least attractive choice.

“There was no way of knowing whether my husband’s condition would take a turn for the worse,” she said. “At the very least I had hoped he would have been admitted to a hotel.”