TOKYO — The voters of Yokohama, which with a population of 3.77 million is Japan’s biggest municipality, could end up hobbling the central government’s efforts to bring casinos to the country.

On Aug. 22, the voters of the Kanagawa prefectural capital will choose their next mayor, with the official campaign period starting on Sunday. The race has grown tense due to a proposal for the city just southwest of Tokyo to host a large casino-centered entertainment and leisure resort. Plans call for the possible “integrated resort” to also hold hotels, restaurants and conference halls.

Incumbent Mayor Fumiko Hayashi is championing the gambling venue, arguing that its potential to generate tax revenue could offset expected shortfalls as the city’s population begins to decline and age at an accelerated pace.

There are eight candidates so far, with high-profile names contemplating whether to jump into the race. Of those already running, only Hayashi, who is seeking a fourth term, and Mineyuki Fukuda, a former lower house member from the governing Liberal Democratic Party, favor the resort.

Among the candidates who oppose the idea are Hachiro Okonogi, who recently stepped down as chairman of the National Public Safety Commission and as minister of state for disaster management; Takeharu Yamanaka, a former professor at Yokohama City University; Shigefumi Matsuzawa, a former Kanagawa governor and current upper house lawmaker; and Yasuo Tanaka, a novelist, former lower house member and previous governor of Nagano.

That six candidates are against the casino-based project and only two for it reflects the current sentiment in Yokohama, where Prime Minister Yoshihide Suga entered national politics a quarter-century ago.

Whoever wins the election will have to deal with popular opposition to the city’s bid that is expected to shape into a political force which could apply the brakes to the Suga administration’s drive to build casinos and accompanying resorts in Japan.

What has made the election especially unusual is Okonogi’s surprise move to resign from Suga’s cabinet, enter the race and run against the gambling project despite his close relationship with the prime minister.

Hayashi, too, seems to be on her own. She ran her three previous elections with the LDP’s support but will not have it this time.

In the previous mayoral race, Hayashi managed to keep her position on the bid unclear, then came out supporting it after winning, disappointing some voters. She also has not held a referendum on the plan despite civic groups having collected large numbers of voter signatures.

The LDP considers it risky to support Hayashi again in light of public opinion against the resort.

Okonogi hopes to win support from the gambling plan’s opponents, and many city assembly LDP members stand behind him. Others support Hayashi because of Suga’s strong advocacy for the casino as an international tourist attraction.

If Okonogi — who says the bid should be scrapped and the fight against COVID-19 prioritized — wins, he would face questions about how to address the integrated resort plan once the virus is snuffed out.

Similar questions could dog Okonogi leading up to election day, and if he fails to soothe anti-resort voters, some of their ballots could go to other anti-resort candidates; that would work in Hayashi’s favor. 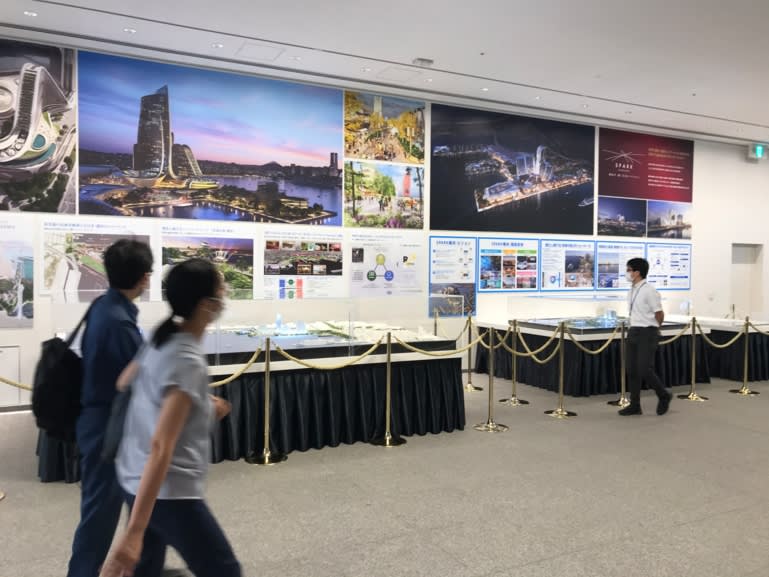 Models of the casino-centered resort are displayed in Yokohama City Hall. The prospect of having a gambling den in the city has become a top issue in the upcoming mayoral election.

Should the incumbent gain a fourth term, she would have to exercise prudence in promoting the plan due to the widespread public opposition to it. As prospects for arresting the spread of the virus remain unclear, Hayashi could bring up her favorabilities by curtailing her promotion of the project while assessing inbound tourism and related trends, analysts say.

After legalizing casinos in 2018, Japan planned to license three integrated resorts, sparking speculation that the country would become the world’s second-largest gaming market after Macao.

Local governments interested in hosting one of the resorts must present plans to the central government by the spring of 2022. Yokohama, Osaka Prefecture, Osaka City, Wakayama Prefecture and Nagasaki Prefecture have been preparing to do so. In Yokohama, the city office is to shortly choose one of two business enterprises that have filed to build and operate a resort.

If electoral politics push Yokohama, considered a strong candidate to host one of the resorts, to give up the attempt, the central government’s selection process would be affected.

With so many candidates in the race, there is a possibility of none garnering 25% of the vote, which would necessitate a redo.

The last time something similar took place was 2003, in a mayoral election in Sapporo, Hokkaido.

Should a political vacuum arise because of the reelection, residents of the megacity could be adversely affected amid the fight against COVID-19.

The sentiment of voters in the city that gave Suga his political start is also casting a shadow over lower house elections expected in the fall. In fact, the LDP has been smarting since Tokyo Metropolitan Assembly elections last month, when the governing party won its second smallest number of seats on record.

Indeed, public criticism of the Suga administration’s poor handling of the pandemic has been persistent, and some politically independent voters are turning their back on the LDP.

This represents quite a turn. While Suga’s predecessor, Shinzo Abe, was prime minister, the LDP consistently won national elections with the support of political independents.

What is more, the Yokohama poll will be held amid a fifth wave of coronavirus infections that is pulling down the Suga cabinet’s approval rating to its lowest level since its formation last September. In the coming lower house elections, the first national polls for the Suga administration, the LDP will be unable to avoid headwinds if it fails to win support from politically independent voters in the mayoral race in the prime minister’s political birthplace.

Inside Japanese Politics is a column that focuses on the details and inner workings of Tokyo statecraft, policy and foreign relations.