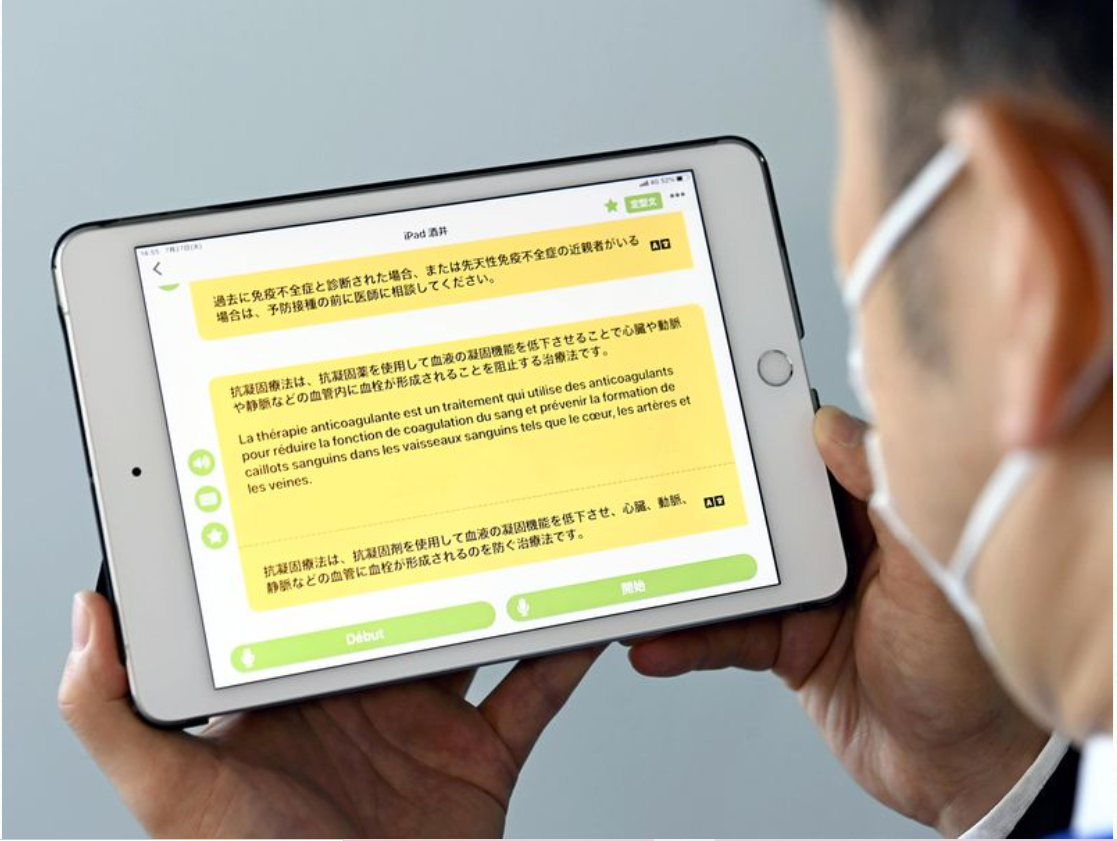 The use of translation apps has increased at COVID-19 vaccination sites to facilitate shots for foreign nationals, and some companies offer special versions that include medical terminology and have other features tailored for the inoculation process.

Foreign nationals living in Japan are eligible for vaccination at inoculation centers run by their local governments and other sites.

A check for whether a person has had severe allergic symptoms or other problems is necessary before receiving a shot. However, only a limited number of vaccination venues have made arrangements that allow foreign residents to communicate accurately in languages other than Japanese. Municipalities — particularly those with many foreign residents — have been concerned about communication with foreign recipients at inoculation sites.

Konica Minolta, Inc. has started offering MELON, a translation app that supports 20 languages including English and Chinese. Tablets can display technical information such as “anticoagulation therapy is intended to reduce the coagulation function of blood using anticoagulant drugs” and “it is a treatment that prevents the formation of blood clots in blood vessels.” If the app cannot handle the matter, users can ask an interpreter for assistance via teleconference on a special website.

The service costs about tens of thousands of yen per month, according the company’s public relations section.

Konica Minolta has signed contracts with more than 100 local governments, and the app has also been used in the Olympic Village in Tokyo.

About 39,000 foreign nationals live in Kawaguchi, Saitama Prefecture, according to an official of the city government’s office promoting COVID-19 vaccinations.

“The translation app has provided a sense of ease among people at vaccination sites,” the official said.

Toppan Inc. is providing a free translation app to vaccination sites during the limited period of June to December.

The app is designed to display standardized messages commonly used at vaccination sites in 17 languages including English and Chinese, such as “please submit your vaccination voucher and pre-vaccination screening form” and “please come forward as your vaccine is ready.”

More than 40 local governments, such as Hachioji, Tokyo, and Kimitsu, Chiba Prefecture, are using the app.