Interview with U.S. Ambassador to the UN Thomas-Greenfield 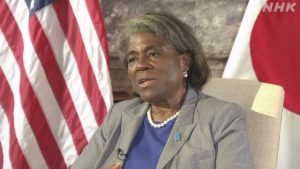 NHK’s “News Watch 9” on Monday carried a five-minute report on its one-on-one interview with U.S. Ambassador to UN Linda Thomas-Greenfield, who was in Japan to represent the U.S. government at the closing ceremony of the Tokyo Olympics. The network said Ambassador Thomas-Greenfield is one of the symbols of the Biden administration’s emphasis on diversity, adding that she has poured a great deal of effort into promoting diversity and equality for more than 30 years since she joined the Foreign Service.

Concerning the Tokyo Olympics’ message of “unity in diversity,” Ambassador Thomas-Greenfield was shown saying: “I think it is a message that we need continue to work to deliver on a daily basis. The Biden administration announced very early on that dealing with issues of racial justice and equity would be one of the highest priorities of the administration. This is not just an issue that the United States faces. It’s a global issue as well.”

The program said the moments during the Tokyo Olympics that particularly left an impression on the Ambassador were the ones when the athletes openly expressed their faith and beliefs, including when members of the Japanese and British women’s soccer teams took a knee before their preliminary match to protest racial discrimination and Simone Biles decided to prioritize her mental health and withdraw from the gymnastics team competition. The program also noted that about 180 openly LGBTQ athletes participated in the Tokyo Games, marking a record high. Ambassador Thomas-Greenfield was shown saying: “I have talked about the fact that I have lived racism and I have survived racism. I feel I am an example of what our country can achieve in the face of adversity. I think the Olympics is a platform that many young people have and they have used that platform to express their views and show leadership as well to the rest of the world. So I honor those young people.”

The program said the Ambassador thinks “unity in diversity” is something the world needs to continue to think about. She was shown saying: “We have to work to be more inclusive and it’s a job that is never ever completed. We are working on it here and we are working on it in the United States as I speak. Japan can look at the American example and look at examples around the world and look at how you can address these issues of inequity.”