US envoy to UN calls out China on human rights 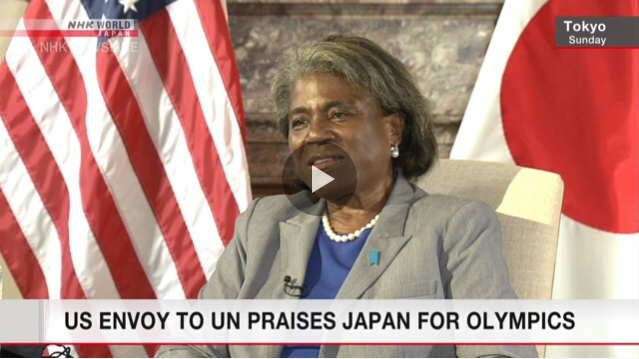 The US ambassador to the United Nations has expressed a stance to deal strictly with the human rights situation in China, which will host the Winter Olympics next year.

Linda Thomas-Greenfield was in Japan to attend the closing ceremony of the Tokyo Olympics.

In an interview with NHK on Sunday, she praised Japan for hosting a successful Games amid the coronavirus pandemic.

She said Japan has received “tremendous” recognition from across the world, and that the country has “so much to be proud of.”

The envoy also touched on the 2022 Beijing Winter Olympics.

US lawmakers have called for a diplomatic boycott of the Beijing Olympics, asking that world leaders refrain from attending the Games.

The administration of President Joe Biden, however, made clear that there has been no change to the American stance on participation in the Beijing Games.

The ambassador said her country is engaging with its allies and partners to discuss how to proceed on the issue.

She said, “We have no hesitation in calling the Chinese out” over “its human rights violations against its own people.”

The envoy also called on Beijing to cooperate with a World Health Organization investigation into the origin of the coronavirus.

Thomas-Greenfield said the world will not be able to avoid a future pandemic without understanding how the current one started. She added that this was a scientific and health issue, not a political one.