TOKYO — With the Summer Olympics over, the National Stadium and other taxpayer-funded venues put up for the Games face the challenge of breaking even and not becoming financial burdens.

The largest is the rebuilt National Stadium, which hosted the opening and closing ceremonies as well as track and field events. The 156.9 billion yen ($1.4 billion) stadium can hold 68,000 spectators. Maintenance costs $22 million a year, and operating rights are expected to be sold once the Olympics and Paralympics end.

The Tokyo Metropolitan Government readied six venues, including the state-of-the-art Tokyo Aquatics Center with an adjustable pool depth. The Kasai Canoe Slalom Center features the first artificial course in Japan. These facilities will be remodeled following the Paralympics — which run from late August to early September — before reopening for events including domestic and international competitions.

Operating rights to Ariake Arena have been sold to a consortium led by advertising agency Dentsu, and the other five venues will be run by private operators as well. But their prospects of breaking even are clouded.

Ariake Arena, which can host concerts, is the only venue forecast to operate in the black, according to the metropolitan government’s figures. It cost 37 billion yen and is projected to turn an annual profit of 360 million yen. 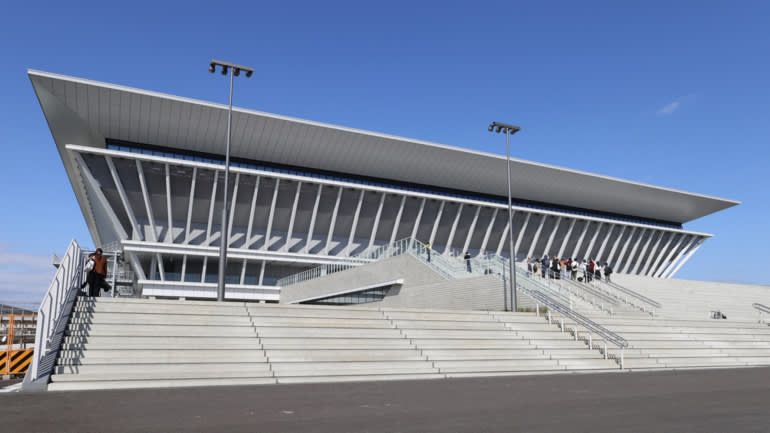 The Tokyo Aquatics Center, built by the Tokyo Metropolitan Government, served as the venue for swimming, diving and artistic swimming events. (Photo by Hirofumi Yamamoto)

The aquatics center was built for 56.7 billion yen and is projected to lose 640 million yen a year, while the canoe center’s annual loss is estimated at 190 million yen.

The fallout from the pandemic hangs over the venues as well, with the latest outbreak hampering efforts to line up big domestic and international tournaments. And mounting losses would increase the likelihood of taxpayers shouldering the burden.

White elephants from the Olympics have not been uncommon. Swimming and golf facilities were among those abandoned after the 2016 Summer Games in Rio de Janeiro, while Olympic Village housing that had been converted to condominiums remains on the market. A baseball stadium from the 2004 Athens Olympics has fallen into disrepair. Larger venues risk turning into financial albatrosses when their post-Games use is misgauged.

Even if turning a profit proves difficult, some see potential for the venues to contribute value to the community as a whole.

“After setting a realistic financial target, there needs to be a discussion with city planning in mind about who should use the venue and how to increase value to the host community,” said Yasuaki Muto, a professor of sports sciences at Waseda University.