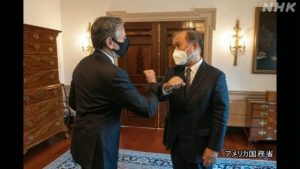 NHK reported online that National Security Secretariat Secretary General Akiba met with Secretary of State Blinken in Washington on Monday. The network said that according to an announcement by the State Department, they “reiterated their shared opposition to any unilateral attempts to change the status quo in the East China Sea and activities that undermine, destabilize, or threaten the rules-based international order.” The two officials also reportedly stressed the importance of preserving peace and stability in the Taiwan Strait, where China is intensifying its military activities, and maintaining respect for international law, including freedom of navigation, in the South China Sea and beyond.

According to the Japanese Embassy in Washington, the two officials also exchanged views on North Korea and confirmed close cooperation between the U.S., Japan, and South Korea as well as through the Quad framework to respond to challenges faced by the region and the international community.

The network said Akiba also met with his U.S. counterpart Sullivan. They reportedly agreed to work closely, especially in the economic security sector, to maintain a free and open Indo-Pacific.