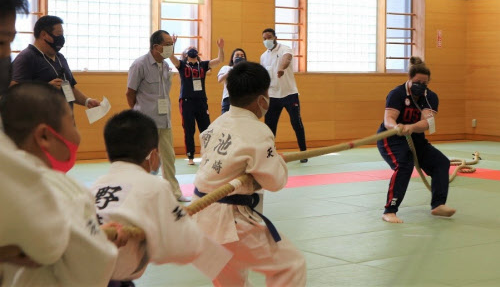 Children felt the strength of American judo athletes by playing tug-of-war with them in Ryugasaki City, Ibaraki Prefecture, on Aug. 1. (Photo courtesy of Ryugasaki City)

Olympic athletes who have finished competing are interacting with Japanese citizens in their Olympic host towns across the nation by introducing their culture and demonstrating their sports before flying back home. The places Olympic athletes were able to visit were strictly limited in principle to their accommodations and training facilities for 14 days after arriving in Japan. However, the athletes have been deepening their friendship with Japanese citizens while taking measures against COVID-19 after completing their events. The municipalities want to take advantage of precious opportunities after the Games to develop the bonds established through the Olympics.

Making the most of a less than ideal situation

On Aug. 1, Ryugasaki City, Ibaraki Prefecture, held a gathering for four American judo athletes and 10 local elementary and junior high school students who practice judo. One of the students asked the American athletes, “What is your favorite technique?” After the event, the students were delighted, and said: “We enjoyed meeting the athletes we had only seen on TV before. It was a great memory of our summer holiday.”

The city is registered as the host town for the American judo team.

Although the city hosted the training camp of the American team, it did not hold an exchange event involving its residents during the camp because the athletes were still under strict movement restrictions imposed after their arrival in Japan and were preparing for the Olympic Games.  A representative of the municipal government says, “(The delegation and the city) both felt anxious.” So the city waited until a certain period of time had passed since their arrival in Japan and decided to hold an exchange event following the Games during the limited amount of time they had before they left Japan.

The gathering featured a tug-of-war to enable the students to actually feel the strength of the athletes without physical contact. Nefeli Papadakis, 22, who took part in the event, expressed gratitude by posting a message saying, “It was a wonderful experience” on her Instagram account.

Quite a few municipalities are also inviting Olympic athletes to visit after the Games or holding online exchange events with them.

Matsukawa Town, Nagano Prefecture, invited two Costa Rican track and field athletes from Aug. 3 through 5 to hold a post-Olympics exchange event. About 20 people who were involved in the event were vaccinated ahead of time.  The children and adults who participated in the event avoided physical contact with the athletes, who demonstrated hurdling to them. In return, the town gave the athletes a calligraphy lesson.

Eniwa City, Hokkaido, held an exchange event with the Guatemalan track and field team on Aug. 7.

The city explained the outline of the event and its detailed anti-infection measures on its official website. A representative of the city says, “We’d like to hold the event without causing concern among citizens.” (Abridged)