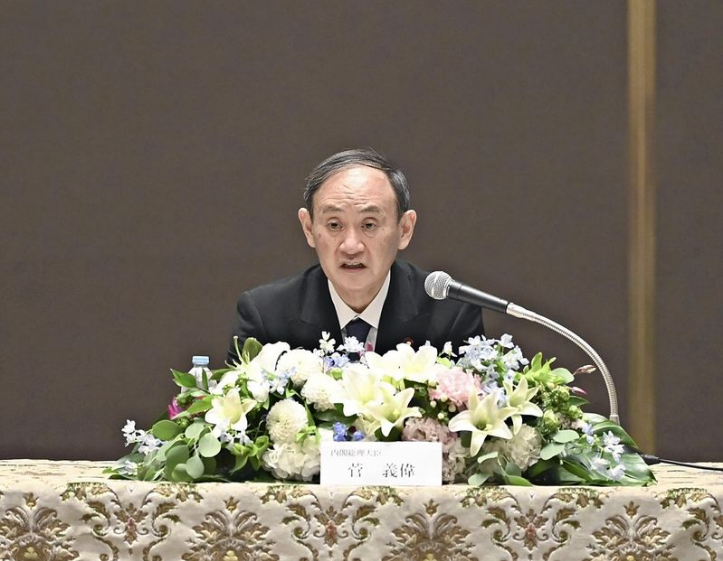 The Tokyo Olympics achieved a measure of success, but another extremely low approval rating for Prime Minister Yoshihide Suga’s Cabinet has shown that the Games did not give the administration a boost.

Time is running out until the end of September, when Suga’s term as Liberal Democratic Party president ends, and coronavirus infections continue to spread with no sign that the pandemic is being brought under control.

Under these circumstances, Suga’s strategy for dissolving the House of Representatives is becoming increasingly uncertain.

“We were able to fulfill our responsibility as the host country and bring the Olympics to a successful conclusion. The outstanding achievements by the participating athletes made the Games a wonderful event,” Suga said at a press conference in Nagasaki on Monday. The 2020 Tokyo Olympics came to an end the day before.

Although many events were held without spectators, Suga appeared to be confident about making the Games happen and told aides that he was “really glad to have pulled through,” according to sources.

The Olympics were ultimately blessed with a medal rush by Japanese athletes and ended without any major disruptions. However, the Games did not boost the approval rating for Suga’s Cabinet.

“The rating managed to stay at this level because the Olympics were held. If the Games hadn’t taken place, it would have been much lower,” said a key member of the Suga Cabinet.

Another Cabinet member was deeply concerned, saying, “Now that the Olympics are over, the public will pay more attention to the problems stemming from the pandemic, and our approval rating could drop even further.”

The nationwide number of new infections with the coronavirus is exceeding 10,000 every day, further increasing pressure on the administration. Recently, the government abruptly announced a review of its policies on how to treat infected people, causing confusion among local governments and front-line medical institutions. This ended up dealing another blow to the government.

At Monday’s press conference, Suga stressed that “vaccination, after all, is the decisive factor in measures to combat the coronavirus.” It is true that vaccinations have proved effective among the elderly, who received shots ahead of other age groups, but infections are spreading among middle-aged and young people.

The public has largely become inured to the pandemic, diluting the impact of declaring a state of emergency and bringing the government to an impasse.

The prime minister’s strategy for the LDP’s presidential election and the lower house election is beginning to come undone.

Suga is believed to have planned to dissolve the House of Representatives in September after the end of the Paralympic Games and to emerge triumphant in the lower house election the following month, thereby allowing him to sail smoothly through the postponed LDP presidential race.

The LDP’s presidential election commission will decide at its next meeting on Aug. 26 when to hold the party election, following the expiration of Suga’s presidential term. The election is slated for late September, according to the party’s rules.

Holding the presidential election as late as possible has been discussed in the LDP, to allow Suga to dissolve the lower house based on an assessment of the infection situation in the nation. If the prime minister dissolves the lower house before the announcement of the LDP poll, the LDP election will be postponed until after the lower house election.

If former National Public Safety Commission Chairman Hachiro Okonogi, who has Suga’s full support, loses the Yokohama mayoral election scheduled for Aug. 22, concerns will grow over the prime minister being the face of the party’s election campaign.

LDP executives such as Secretary General Toshihiro Nikai are trying to create momentum for Suga to be reelected without a vote, but former Internal Affairs and Communications Minister Sanae Takaichi said in a monthly magazine she will run for the leadership of the party.

Depending on how the situation turns out, former LDP Policy Research Council Chairperson Fumio Kishida, who ran for the presidency last September, and others may also file their candidacy.