TOKYO — Japan’s younger voters are the biggest supporters of Prime Minister Yoshihide Suga, after growing to become the most devoted bloc for predecessor Shinzo Abe, a look at past Nikkei polls shows.

Working-age people, more likely to benefit from Abe’s signature economic program, took a more positive view of him over time, the surveys show. But Japan’s politically powerful seniors soured on Abe and his right-hand-man-turned-successor. 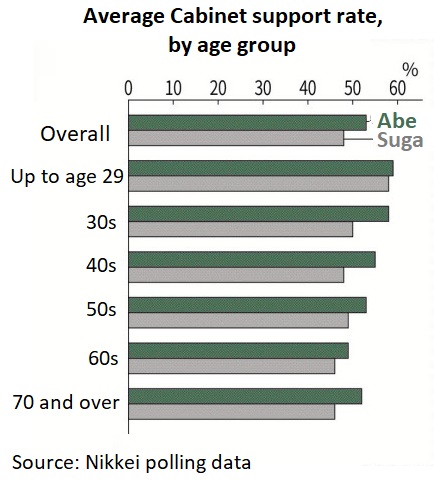 Abe’s approval rating averaged 53% across all surveys from when he took office in December 2012 for a second stint as prime minister, but that figure reaches 59% among those 29 and younger. Support declined with age, hitting a low of 49% among Japanese in their 60s before ticking up slightly in the 70-plus bracket.

The pattern has been similar for Suga. His approval numbers have averaged 48% over time — falling from a high last September when he became prime minister to a low in the latest survey in July. But by age group, Suga’s rating is highest among under-30s at 58% while bottoming out at 46% among those 60 and older.

Abe did not enjoy youth support early in his tenure. A December 2012 poll showed 53% of those ages 30-39 approving of the then-new leader, 9 percentage points below the average. The highest support was found among the oldest voters, at 71%. 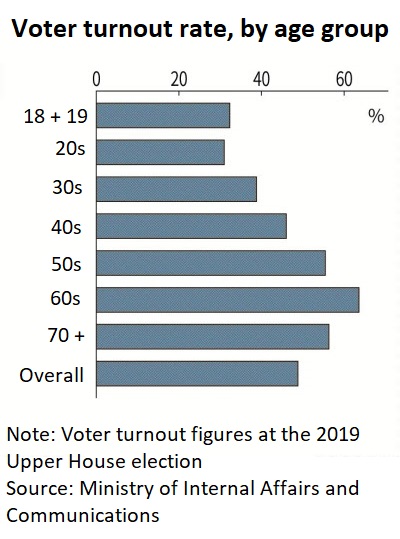 The impact of Abenomics may have factored into the eventual flip, as Japan’s unemployment rate fell to 2.4% in 2019 from 4.3% in 2012. China took notice following Japan’s upper house parliamentary election in July 2019, with its embassy in Tokyo highlighting that “support of young voters contributed to Abe’s victory” in an analysis sent to Beijing. The report identified the employment rate as a key factor in their support, underscoring the importance of labor policies.

Suga administration policies such as pushing for lower mobile service rates and expanding support for fertility treatments also have been welcomed by working-age people.

But the picture in elections is more complicated. Participation in the 2019 upper house election was highest among those ages 60-69, at 63.6% — far above the overall average — in a group that makes up the largest share of the population. Those younger than 40 clocked in below 40%.