Taiwanese president urges Japan, others to team up 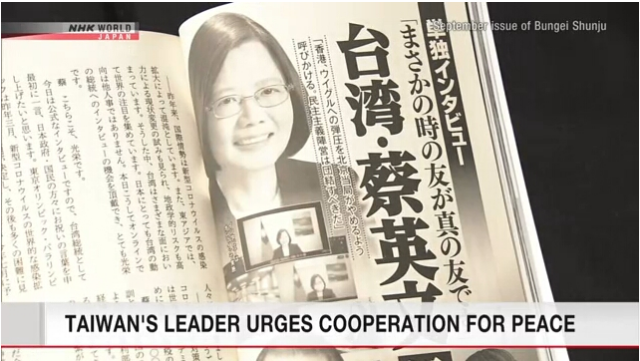 Taiwanese President Tsai Ing-wen has called on Japan and other developed countries to step up cooperation to help ensure peace and stability on the Taiwan Strait.

Tsai made the appeal in an online interview with Japanese monthly magazine Bungei Shunju published on Tuesday.

She mentioned the joint statement issued after a Japan-US summit in April and the communique of the Group of Seven summit in June, both of which referred to the importance of peace and stability on the strait.

She said that by discussing the Taiwan Strait and expressing concern by Japan, the United States and other nations will send a signal to China, which has been continuing its military buildup.

Tsai also said that increasing collaboration among Taiwan and its partners will make Beijing exercise restraint in its policy-making, including military activities.

The president said Japan’s donation of coronavirus vaccines to Taiwan is proof of their long-standing friendship, and she is grateful that the country offered a helping hand at a most challenging time for Taiwan.

As a message to the Japanese people, Tsai said mutual consideration and support, which she calls a cycle of goodness, is very important.

She added that she wants to pass on the bilateral relations to the next generation.