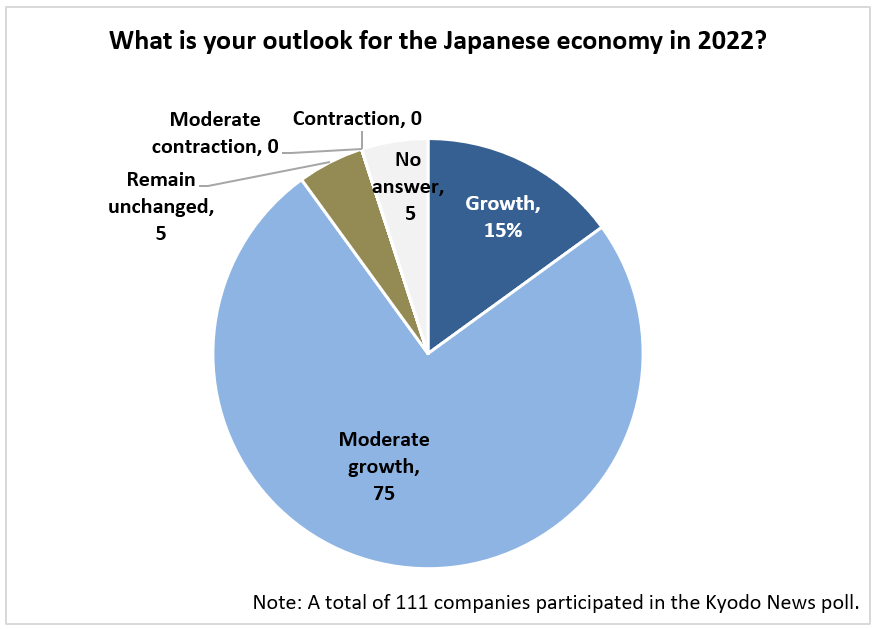 TOKYO — Ninety percent of major Japanese companies expect the country’s economy to expand in 2022 on hopes that the fallout from the coronavirus pandemic will subside, a Kyodo News survey showed Thursday.

The survey on 111 companies, including Toyota Motor Corp. and Sony Group Corp., also showed companies increasingly joining global efforts to curb greenhouse gases and striving to ensure economic security amid an intensifying U.S.-China rivalry, with a focus on supply chains for chips and energy resources.

The survey found 75 percent of the firms expect moderate economic growth next year, followed by 15 percent that said the world’s third-largest economy will expand in 2022.

Five percent said they expect economic conditions to remain unchanged, while no company projected a moderate decline or contraction.

With multiple answers allowed, 93 percent of the firms foreseeing economic expansion said they believe so due to the progress in coronavirus vaccinations, while 83 percent cited the recovery in private consumption and 72 percent pinned hopes on an easing of coronavirus restrictions on economic activities.

Despite the optimistic outlook by the companies, concerns remain over the pandemic going forward, with the government’s inoculation campaign remaining slow and the highly contagious Delta variant driving up infection cases nationwide, analysts say.

If the infection situation does not improve as hoped for, recovery of private consumption could be delayed, and supply chains could be disrupted, respondents in the survey said.

As for the current condition of Japan’s economy, 56 percent of the companies said it is flat, and 40 percent said it is expanding moderately.

Twenty-six percent of the firms said they expect quarterly sales to return to pre-pandemic levels in 2022 and 16 percent expect any recovery to materialize in 2023 or later.

But some companies fared well despite the global health crisis, with 16 percent saying sales have already recovered to pre-pandemic levels and 5 percent not seeing any declines in sales.

As the administration of Prime Minister Yoshihide Suga promotes efforts to combat climate change, with the target of achieving carbon neutrality by 2050, 94 percent of the companies said they are taking steps to reduce carbon dioxide emissions.

Many companies also said they need to protect supply chains to ensure procurement of high-tech parts such as semiconductors as well as energy and mineral resources when the United States and China impose sanctions and export controls on each other.

The Japanese government has also been focusing on enhancing domestic development and production of cutting-edge semiconductors to reduce the country’s dependence on foreign manufacturers amid a global chip crunch.