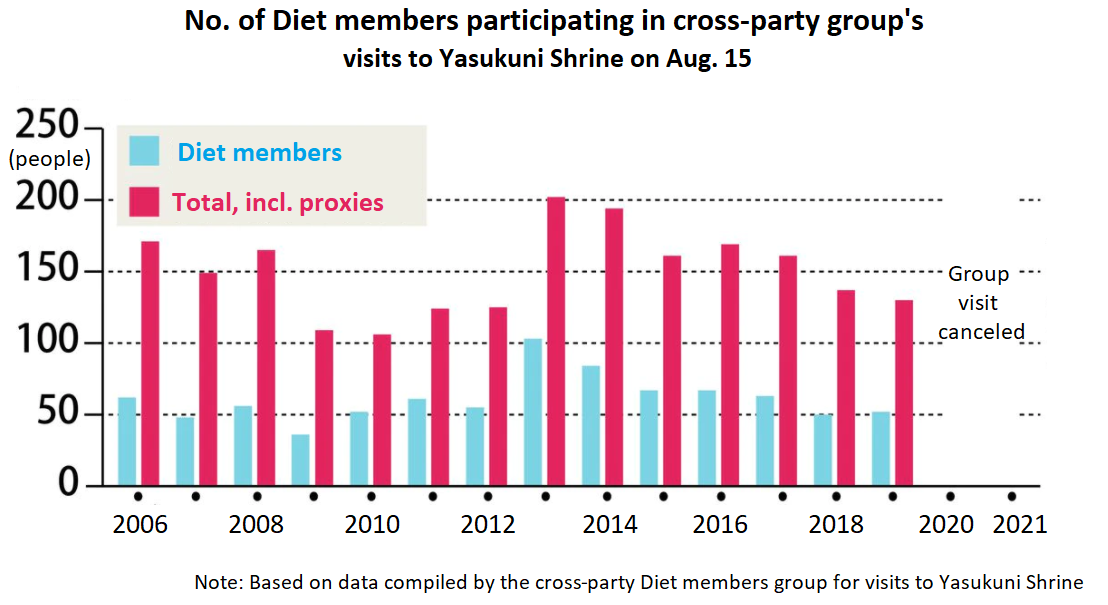 A cross-party group of Japanese Diet members will forgo visiting Yasukuni Shrine in Tokyo’s Kudankita district this year on Aug. 15, which marks the end of World War II. The group visit has been canceled now five times in a row, including the annual festivals in spring and autumn, due to COVID-19. As the number of parliamentarians born after the war increases, the number who visit the shrine is on the decline. Feeling increasingly desperate about the lack of participation, the parliamentary group is calling for Diet members to make individual visits to Yasukuni Shrine.

Former House of Councillors Vice President Otsuji Hidehisa, who chairs the cross-party group, and Upper House Rules and Administration Committee Chairman Mizuochi Toshiei, who heads the cross-party group’s secretariat and chairs the Japan War-Bereaved Families Association, will visit on Aug. 15 as representatives of the group. Both are members of the Liberal Democratic Party.

Traditionally, the cross-party group has paid a group visit to Yasukuni Shrine during the annual festival held in spring and autumn and on Aug. 15. However, it has not visited since April 2020 due to the spread of COVID-19. The first visit to be canceled was the group visit for the spring festival, and the group has forgone visits since then to prevent infection. Moreover, the visits have fallen during times when the capital was under a state of emergency.

The cross-party group was established in 1981, and the first chairman was former Prime Minister Takeshita Noboru, and the secretary-general was former Prime Minister Hashimoto Ryutaro. Currently, 227 Diet members from such political parties as the LDP and Nippon Ishin (Japan Innovation Party) participate in the group. No Komeito, Japanese Communist Party, or Social Democratic Party parliamentarians belong to the cross-party group.