Suga eases workload for summer, but won’t take day off 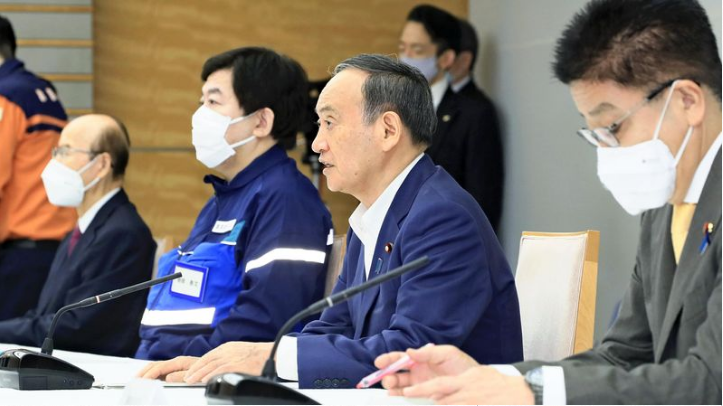 The Yomiuri Shimbun / Prime Minister Yoshihide Suga, second from right, attends a Cabinet meeting at the Prime Minister’s Office on Friday to discuss the heavy rains affecting the country.

However, the surge in coronavirus infections makes it difficult for him to completely take time off, leading to concerns of built-up fatigue.

Suga arrived later than usual Thursday at the Prime Minister’s Office, taking his desk shortly after 11 a.m. He went out at one time, but called it a day and left the office after 5 p.m. The day’s meetings were limited to receiving reports from senior officials of the health ministry and others on the current situation of the pandemic.

That said, the prime minister has not had a full day-off since March 28, as he also meets on weekends with senior health ministry officials and others. By meeting Friday with Cabinet members to discuss the heavy rains affecting the country, Suga has now worked for 138 consecutive days, based on the Yomiuri Shimbun’s log on the daily activities of the prime minister.

“The prime minister looks exhausted,” said a Cabinet minister who frequently meets with him. “His eyes have lost their intensity.”

In recent days, Suga finishes meetings with senior ministry officials in an indifferent manner, which sometimes surprises them.

One close official said, “He’s getting tired, and the times when he can’t concentrate on issues that don’t interest him are increasing.”

Former Prime Minister Shinzo Abe worked 147 consecutive days between January and June of last year. He later resigned due to the worsening of a chronic illness.

“Leaders who are required to make quick and accurate decisions should rest as much as possible,” said Sota Shimozono, a psychologist and former senior officer of the Ground Self-Defense Force. “Even if they can’t take time off, it is necessary to find a way to manage by reducing meetings and travel.”