Cabinet support rates at lowest-ever levels even after Olympics 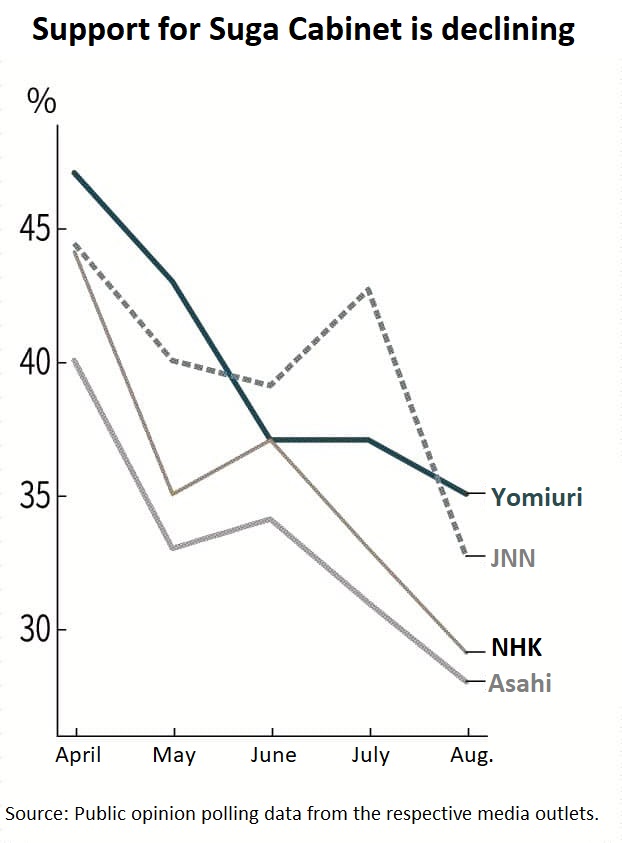 Opinion polls conducted by media outlets from the final days of the Tokyo Olympics until after the Games closed on Aug. 8 showed the Suga Cabinet approval rating at its lowest levels since its inauguration in September 2020. The government and the ruling parties had anticipated that the Olympics would boost the administration in the public’s eyes, but the recent opinion polls do not bear that out. The ruling parties face headwinds as the autumn House of Representatives election approaches.

The disapproval rates, phrased as “not support” or “cannot support” depending on the poll, reached record highs in each media outlet survey. More than half of all respondents in each survey reported that they do not back the Suga administration, with 52% of pollees in the NHK survey (up from 46% in the July poll), 54% in the Yomiuri poll (up from 53%), 53% in the Asahi poll (up from 49%), and 63.5% in the JNN survey (up from 54.3%) saying they do not support Suga.

Across the board, the surveys found that pollees approving of the Tokyo Olympics numbered in 50%–60% range. This positive assessment of Tokyo’s going forward with the Games did not result in support for the Suga Cabinet, however.