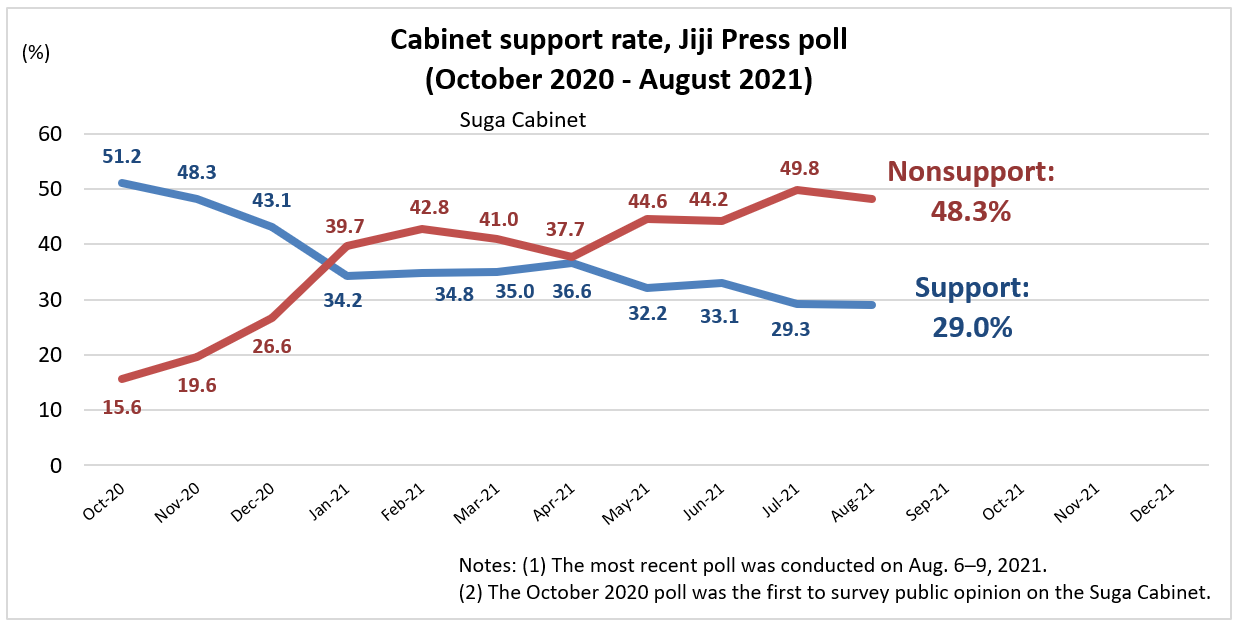 It was the first time for the approval rating of a Japanese cabinet to stand below 30 pct for a second straight month since the launch of former Prime Minister Shinzo Abe’s second administration in December 2012.

A public support rating below 30 pct is widely regarded as a danger zone for a cabinet.

The poor rating apparently came with the Suga administration seen failing to launch effective measures against the novel coronavirus amid the rapid resurgence of infection cases across the country, pundits said.

The disapproval rate for the Suga cabinet stood at 48.3 pct, down 1.5 points.

In the survey, conducted for four days through Monday, the share of people who did not support the government’s response to the coronavirus crisis came to 55.2 pct, down 3.9 points, while that of those who rated positively the response stood at 25.7 pct, up 3.0 points.

Respondents who answered neither or said they do not know accounted for 19.1 pct.

The share of respondents who believed that the pace of progress on COVID-19 vaccinations has been slow came to 72.4 pct, far higher than the 16.3 pct rating the progress as smooth.

Among those disapproving the Suga cabinet, 27.1 pct, the largest group, said they expect nothing from him. A lack of leadership skills was also cited by 27.1 pct.

The support rate for Suga’s ruling Liberal Democratic Party rose 2.3 points to 23.7 pct, and that for Komeito, the LDP’s coalition partner, grew 2.0 points to 4.5 pct.

Meanwhile, the support rate for the main opposition Constitutional Democratic Party of Japan fell 0.6 point to 3.9 pct. It was the third time for the rate of the CDP to fall below that of Komeito since the CDP was launched in September last year.

The share of respondents who supported no particular political party came to 61.4 pct.

The interview-based survey covered 2,000 people aged 18 or over across Japan. Valid responses were received from 64.0 pct.

Note: The NHK Party (NHK To) was referred to as “Arashi Party (Arashi no To)” in the previous poll.