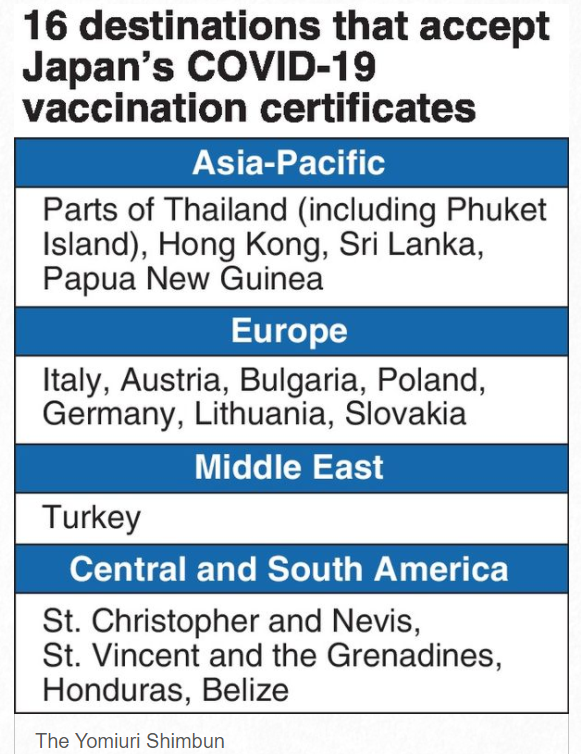 Only 15 countries and one region, as of Friday, were accepting COVID-19 vaccination certificates issued by the Japanese government. This is because many governments have responded reluctantly to Japan for its strict border control measures that in principle ban the new entry of foreign travelers.

According to the Japan National Tourism Organization, the United States was the most popular destination for Japanese travelers in 2018 before the global pandemic, with about 3.5 million people visiting the country. It was followed by South Korea, China, Taiwan and Thailand.

Among the top 10 most popular countries and regions, only three destinations — Thailand, Hong Kong and Germany — accept Japanese vaccination certificates.

Currently, more than 70 countries and regions, including France and Indonesia, have established preferential measures for holders of vaccination certificates, such as exemption from quarantines and virus testing upon arrival, or shortening of quarantines.

The Japanese government is negotiating with these countries and regions to approve Japanese certificates.

However, many of them are said to be reluctant to accept Japan’s certificates, stressing the importance of reciprocity.

In other words, they cannot respond to Japan’s request unless the Japanese government also allows the entry of vaccinated travelers from their sides.

The Japanese government hopes to consider easing the restrictions on the entry of vaccinated travelers. However, infections continue to spread across the nation, and under these circumstances, “it is difficult to even discuss the matter,” according to a person close to the government.

Local governments started accepting applications for certificates on July 26, but there seems to be a mismatch between supply and demand.

For instance, Tokyo’s Shinagawa Ward had received about 1,280 applications for certificates by Thursday. However, applicants’ planned destinations include the United States, Britain, France and many other destinations that do not accept Japanese certificates. Regardless of their intended destinations, however, certificates are issued for those who apply.

Many people are believed to have applied for certificates for future use.

“The purpose of the use of certificates is not subject to screening, so everyone — including those who don’t even have a plan to go abroad — can apply,” said a senior Foreign Ministry official.