Huge port facilities to be built on Mage Island 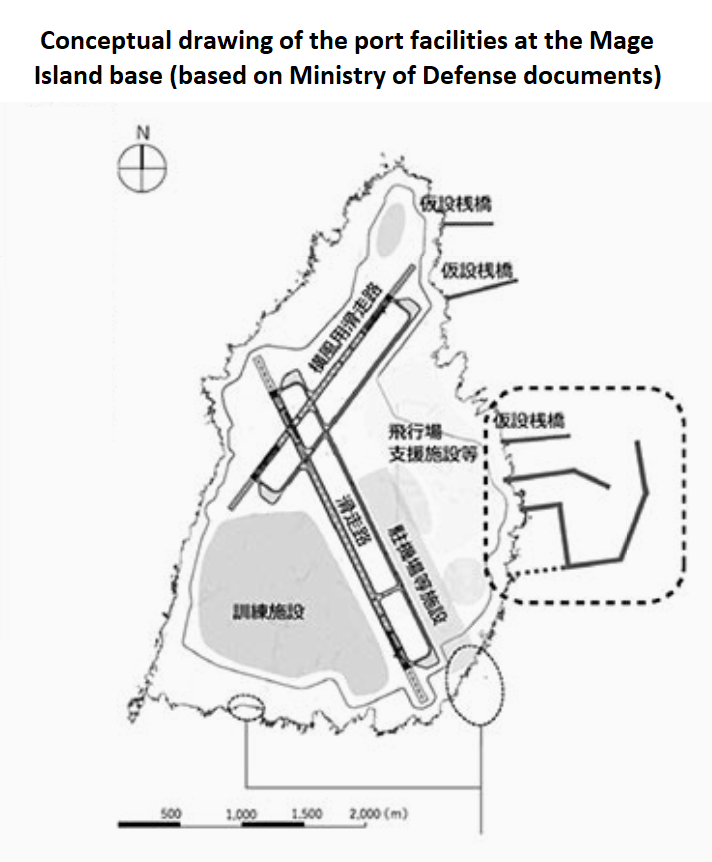 Shimbun Akahata has learned that the mooring facilities to be built on Mage Island for naval vessels will be a huge facility extending about 1,300 meters into the sea. The facility is being constructed as part of the plan to build a Self-Defense Force (SDF) base on Mage Island (Nishinoomote City, Kagoshima Prefecture) and to transfer the U.S. military’s Field Carrier Landing Practice (FCLP) to the island. The facilities are likely to be able to handle large SDF vessels as well as U.S. military assault landing ships used in Japan-U.S. joint exercises.

On Aug. 6, the Ministry of Defense (MOD) released the diagram of the port facilities to be built on the island. The mooring facilities located to the east of the runways will be composed of seawalls, piers, and breakwaters, and will be used to bring in personnel, fuel, equipment, and materials as well as to moor and supply ships. According to the MOD, the planned facility will extend about 1,300 meters into the sea and be about 1,000 meters in length north to south.

Three temporary piers to transport materials and equipment for building the facility are being planned with the following lengths, respectively, starting from the northernmost pier: about 500 meters, about 700 meters, and about 700 meters.

It is envisioned that drills using Landing Craft Air Cushion (LCAC) and Assault Amphibious Vehicle, personnel model 7 (AAV7) will be held on the island. Asked if the facilities will be used to moor the Osumi and Shimokita, Maritime Self-Defense Force amphibious transport docks, as well as the Izumo, an escort vessel which is being upgraded into an aircraft carrier, the MOD said “actual operation will be decided going forward” and thus did not deny the possibility.

The intended site for the port facilities is an area where a kind of shellfish known as “small abalone [Sulculus diversicolor supertexta]” congregates and there are concerns about the impact of the facilities on these local fishing grounds.