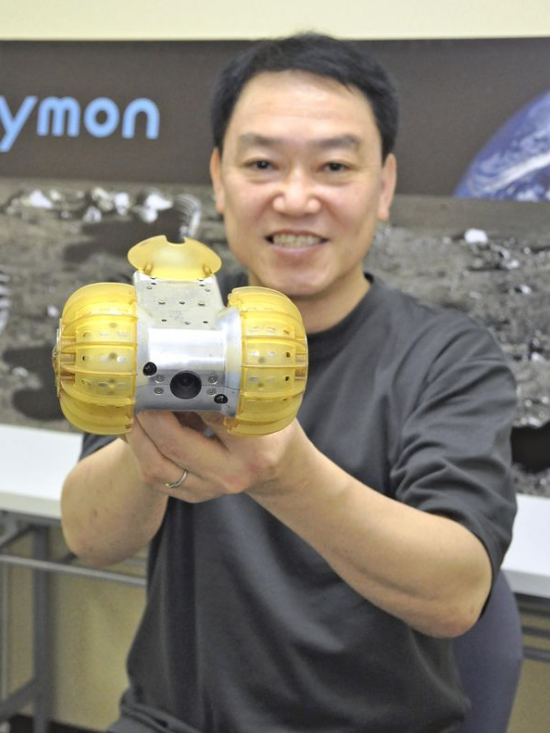 A small lunar rover developed by Japanese robotics venture Dymon Co. is scheduled to be launched early next year, in what would be the world’s first commercial lunar exploration.

The Tokyo-based company completed development of the rover, called Yaoki, this summer. Final arrangements are now being made for it to travel to the moon as part of a project conducted by the U.S. National Aeronautics and Space Administration.

Yaoki is 15 centimeters wide and 15 centimeters deep, and weighs about 500 grams. It has hemispherical wheels on both sides of its cylindrical body that allow the rover to travel on sand without getting bogged down and even move if it gets turned over.

The name is derived from the Japanese proverb “Nanakorobi yaoki,” which literally means fall down seven times, get up eight.

Yaoki will aim to explore large cavities under the lunar surface. The cavities are believed to have been formed by volcanic activity, and there are hopes that a manned base can someday be built there.

The plan is to have the rover head for vertical holes that could be connected to cavities, take photos of the lunar surface and the inside of the cavities, and send the images to Earth.

Yaoki is expected to take the lead in Japanese lunar exploration. However, the Japan Aerospace Exploration Agency is also scheduled to launch its own rover, called the Smart Lander for Investigating Moon (SLIM), next fiscal year.

Japanese space startup Ispace, Inc. plans to send up its lunar lander in the second half of next year.

“We’ll release photos and videos taken [by the rover] to allow many people to see them,” said Dymon Chief Executive Officer Shinichiro Nakajima, 55. “By becoming the first to land on the moon, we want to prove that even a small company can make its dream come true.”