LDP’s support rate is fourfold that of main opposition party 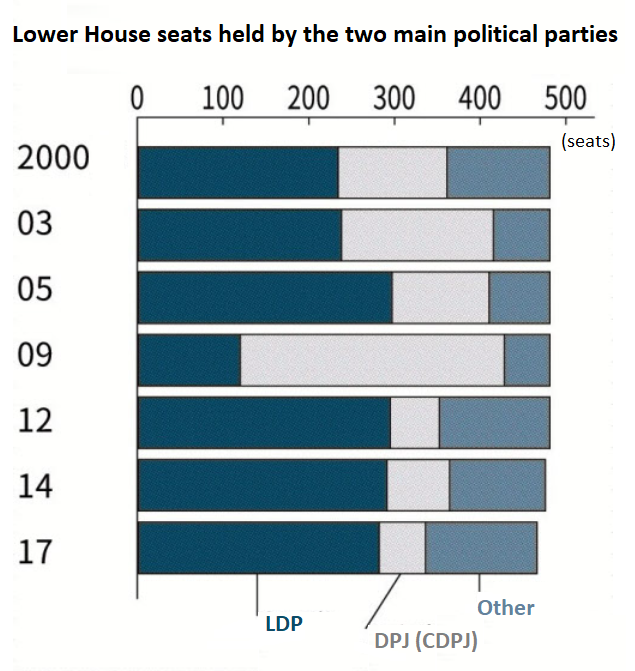 The Liberal Democratic Party (LDP) holds 2.5 times the number of Lower House seats as the Constitutional Democratic Party of Japan (CDPJ), the main opposition party. It cannot be said that Japan has a two-party system of the type where there are changes of government, as in the United States and the United Kingdom. The Nikkei analyzed the changes in the support rates for the two main political parties based on the results of its public opinion surveys since 1987.

In the July 2021 poll, the LDP garnered the support of 38% of respondents while the CDPJ gained only 9%. Going back to November 2017, when the CDPJ first appeared in the list of political parties in the survey, reveals that support for the LDP has trended around 40% while that for the CDPJ has stayed around 10%. The LDP has a support rate that is fourfold that of the CDPJ. 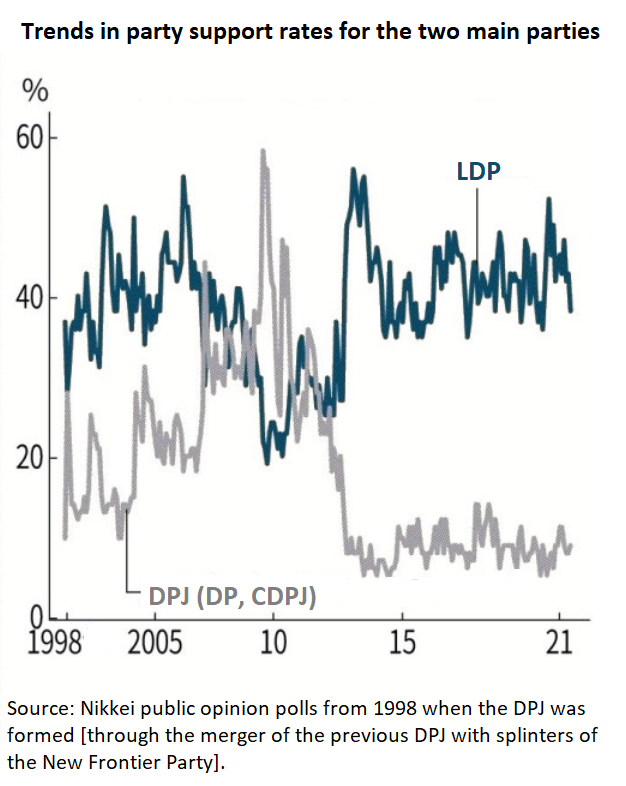 In the Nikkei’s September 1987 public opinion survey, the LDP had the support of 43% of respondents while the Japan Socialist Party (JSP) had 18%. It was the era of the 1955 regime, during which the LDP was the dominant party. Japan was said to have a “1.5-party system” rather than a two-party system.

The JSP garnered the public’s support for a time in 1989, a time when the LDP faced headwinds due to the administration’s move to introduce consumption tax. The LDP, however, dominated in terms of political party support through 1993.

In August 1993, Hosokawa Morihiro assumed office as prime minister with his coalition government, becoming the first non-LDP administration in Japan since 1955. In the Nikkei poll conducted later that month, the JSP slipped down the rankings to become the fourth main party. The Japan Renewal Party led by Ozawa Ichiro and others was the second main party, followed by the Japan New Party led by Hosokawa. This was an era when there were multiple opposition parties battling the LDP.

The New Frontier Party founded in 1994 aimed to replace the JSP as Japan’s second main party. In the Nikkei poll taken in December 1994, the LDP garnered the support of 29% of respondents and the New Frontier Party received 15%. The party later disbanded, however, due to internal conflicts.

The Democratic Party of Japan (DPJ) was formed in 1998. In the Nikkei poll conducted in August that year, the LDP and the DPJ each had a party support rate of 28%.

The DPJ maintained a support rate of between about 20% and 30% after a successful showing in the 2003 Lower House election. The DPJ overtook the LDP in the July 2007 Upper House race. The DPJ enjoyed a 44% support rate in the Nikkei poll taken after the election, exceeding the LDP’s 29% support rate by a substantial margin.

Support for the DPJ exceeded that of the LDP for most months of 2009, and this led to the change of government in the summer of that year. While the DPJ held the reins of power, it had support rates on a par with those of the LDP and even exceeding the LDP at times.

In 2012, the LDP once again became the main party. Since that time, the two main parties have not been equal in terms of party support rate.

The LDP regained the reins of government in December that year. After that, the DPJ or its successor, known as the Democratic Party [Minshinto], had public support in the 10% range or in the single digits. Meanwhile, the LDP enjoyed support in the 40–50% range.

Except for times when there is a change of government, it is rare in Japan for two political parties to have similar support rates. This stands in contrast to the United States with its Republican and Democratic Parties and the United Kingdom with its Conservative and Labour Parties.

Judging from the polling statistics in 2009 and 2012, there is a good chance that there will be a change of government in Japan if the party support rate for the main opposition party exceeds or rivals that of the ruling party going into a Lower House election.