73% opposed to having integrated resort in Yokohama, Kanagawa Shimbun poll 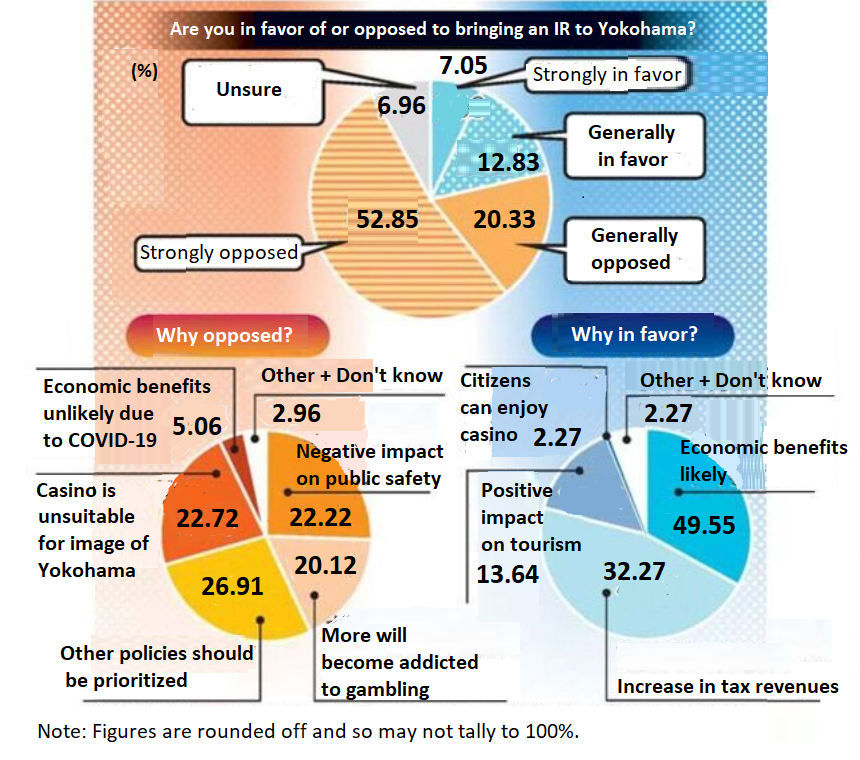 According to the telephone-based public opinion poll conducted by the Kanagawa Shimbun on Aug. 13–14 in advance of the Yokohama mayoral election to be held on Aug. 22, a total of 73.18% of Yokohama citizens are opposed to the integrated resort (IR) that is being promoting by the city and will feature a casino. The most frequently given reason for opposing the city plan was that “other policies should be prioritized.”

The most frequently given reason for opposing having an IR in the city was “priority should be given to other policies” (26.91%), followed by “a casino does not fit the image of Yokohama” (22.72%), “concern about a negative impact on public safety” (22.22%), and “more people will become addicted to gambling ” (20.12%).

Of the eight candidates in the Yokohama mayoral election, two are in favor of bringing an IR to Yokohama: former House of Representatives member Fukuda Mineyuki (57) and incumbent Hayashi Fumiko (75).

[Going into the final week of campaigning, Yamanaka is leading, followed by Okonogi and then Hayashi, Matsuzawa, and Tanaka. About 20% of respondents said that they have not decided how they will vote so there is a chance the situation will change depending on the actions taken by each political camp in the remaining week.]

Polling methodology: The telephone-based survey was conducted on Aug. 13–14, 2021, on a computer-aided random digit dialing (RDD) basis and targeted Yokohama voters. The poll was conducted using an interactive voice response system. Responses were received from a total of 1,107 persons from all 18 wards of Yokohama City.