Japan to be asked to play more roles, take on more responsibilities: ex-ambassador to U.S.

Amid escalating tensions between the U.S. and China, which is ramping up its maritime aggression, the security environments surrounding Japan, including the cross-Strait situation, is intensifying. How should Japan deal with China? How is the U.S. analyzing China? Mainichi Shimbun has recently interviewed pundits on Japan’s policy with China. The first interview was conducted with Sugiyama Shinsuke (68), who served as Japanese ambassador to Washington till this past February.

Q: During the G7 summit held in June, the leaders of the seven nations put together a statement that points a finger at China. What is your view on the current U.S.-China and Japan-U.S. relationships? 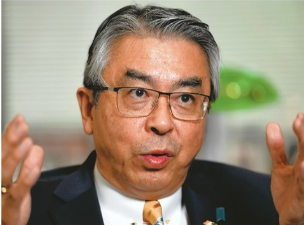 Sugiyama: China is different from what the Soviet Union was back in the cold war era. It is not only regarded as a nuclear power. On the militaristic front, it is pursuing an expansionary policy and growing from a state that focused on strengthening a land-based army to a maritime state equipped with aircraft carrier mobile units. Numerous challenges also exist on the economic front, such as competing for global dominance in cutting-edge technology. The U.S. is growing wary that its status as the world’s only superpower will be challenged. Very few people in the private and public sectors are calling for a more conciliatory approach toward China.

Expectations for Japan and trust in it have never been higher. In the national security strategic guidance, the Biden administration identifies an era of competition between democracy and autocracy and pinpoints China (as a country representing autocracy). By attaching importance to its alliances, Washington calls on its allies to equally share responsibilities and roles they should perform. As it regards its alliance with Japan as the most reliable partnership, it welcomed Prime Minister Suga Yoshihide ahead of other world leaders and held talks with him to build a foundation before the G7 leaders met.

Deterrence against Taiwan situation is important

Q: The Japan-U.S. joint statement released after the meeting of the two leaders made a reference to Taiwan situation for the first time since the normalization of Japan-China diplomatic ties. What was the significance of this?

Sugiyama: It is a symbolic statement as it uses the language “importance of peace and stability across the Taiwan Strait” to describe a sense of crisis held toward China’s expansionary moves. In Hong Kong, the mechanism of one country two systems has collapsed and people have been deprived of freedom of speech. There are concerns that Taiwan is next. But what is written in the statement is not something new. It has been discussed for some time between Japan and the U.S. That is why spelling it out in the statement is of “political” significance. It is hard to envisage a cross-strait contingency now, but it is important to start building a deterrence just in case. What happened in Hong Kong may happen in Taiwan even though no contingency is on the horizon.

Need to continue pressure and dialogue

Q: With regards to the Japan-U.S. alliance, how will Japan and the U.S. move forward with the division of roles? Do you think they will pay more attention to discussions on Japan’s possession of capability to attack enemy bases?

Sugiyama: To enhance deterrence, Japan’s enemy-base-attack capability must be discussed thoroughly, but that is not the only challenge. We must also discuss issues, such as urging China to adopt a more transparent system when helping developing nations with their infrastructure projects. President Trump prioritized tariffs and other money issues, whereas President Biden is making a reference to human rights and expecting the international community to cooperate in a wider sense. While applying pressure on China, we must hold dialogue with it and keep informing it that “what you are doing now will not benefit your country and the rest of the world.”

Now that the Japan-U.S. relationship has never been stronger, working together with the U.S. means Japan will be asked to do more. Washington is trying to draw a big picture of the new division of roles between the two nations. Rather than just doing what the U.S. says, Japan too must give thought to national interests and the benefits and balance of the Japan-U.S. alliance as well as the international community and propose policies for adoption with regard to China. I strongly feel that Japan is approaching a critical juncture.