TOKYO — The U.S., the U.K., Germany and other nations dispatched military planes to Kabul’s international airport on Monday in a mad rush to evacuate their nationals following the Taliban’s swift takeover of Afghanistan, but Japan never sent its own aircraft — the only Group of Seven nation not to do so.

The unfolding events following the U.S. military exit from Afghanistan have forced Japan to grapple with shortcomings in its own security strategy, as lawmakers here draw parallels between Tokyo’s yearslong reliance on American troops and the Afghan military’s inability to hold its own.

Twelve Japanese Embassy staffers in Afghanistan were able to be evacuated to Dubai on a military plane from a “friendly nation,” the Japanese Foreign Ministry said Tuesday.

The staffers had left on a British aircraft, which was the first to depart out of the countries Japan had sought assistance from. But the ministry did not name the U.K. in its release, out of concern it could lead to a barrage of requests for help as panic and chaos spread in the Afghan capital.

Japan had considered leading the evacuation on its own. Foreign Minister Toshimitsu Motegi had instructed staffers on Aug. 12 to start planning for the evacuation of embassy personnel. Initial proposals included sending a Japanese Self-Defense Forces plane.

The SDF had evacuated embassy personnel from South Sudan in 2016 under a law allowing it to protect and transport Japanese nationals during overseas emergencies.

But with the situation in Afghanistan deteriorating rapidly, there was concern that necessary safety reviews and preparatory discussions with the ruling Liberal Democratic Party could take too long.

“It could easily have taken a week to complete the process, so we chose the option that got them out more quickly,” said a Foreign Ministry official. 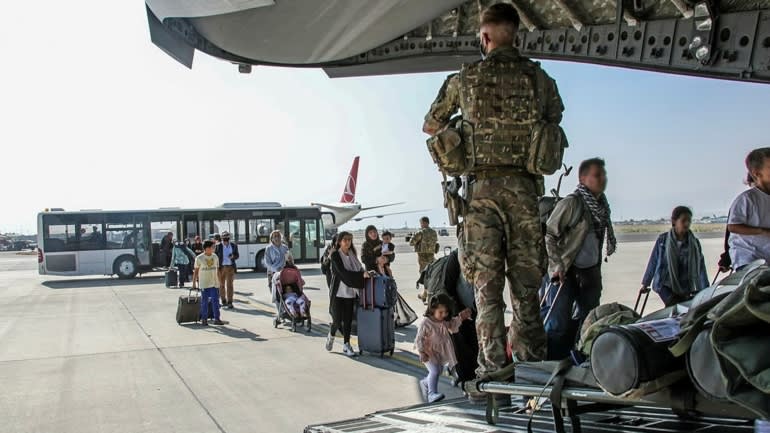 British citizens and dual nationals residing in Afghanistan board a military plane for evacuation from Kabul airport on Aug. 16.   © Reuters

Since the Taliban was last forced out of power in 2001, Japan has contributed roughly 700 billion yen ($6.38 billion) to U.S.-led reconstruction efforts in Afghanistan. It also conducted missions to refuel U.S. vessels in the Indian Ocean until 2010. Still, it was slow to respond to the Taliban’s advance on Kabul, especially when compared with countries like Germany, which decided on Sunday to deploy military planes to evacuate nationals.

Japan’s security decisions for years have assumed U.S. involvement. For example, the SDF’s defensive strategy largely focuses on holding out until U.S. troops arrive, which is why there is so much interest in whether the U.S. would defend the Senkaku Islands, which China claims as the Diaoyu, under Article 5 of the Japan-U.S. security treaty. There is a limit to what Japanese forces can accomplish on its own, even on things like evacuating its own citizens.

The U.S. has been reducing its involvement in the Middle East since the shale revolution turned it into a net exporter of crude oil. But Japan still relies on the Middle East for almost 90% of its crude, meaning it will need to craft a new approach to support stability in the region.

Meanwhile, some Chinese media observe that what is happening in Afghanistan today could happen in Taiwan tomorrow — that the Taiwanese people would be left to their own devices if Beijing attempts a unification by force.

The U.S. withdrawal from Afghanistan reflects Washington’s broader priority shift toward China, and is not a sign of its exit from northeastern Asia. Still, China’s growing military capabilities will diminish the relative clout of the U.S. in the region.

“One more year, or five more years, of U.S. military presence would not have made a difference if the Afghan military cannot or will not hold its own country,” U.S. President Joe Biden said in a statement on Saturday.

Though Japan’s alliance with the U.S. will continue to underpin Tokyo’s security policies moving forward, recent developments have sparked a debate within the LDP that Japan, like Afghanistan, has perhaps relied too heavily on a U.S. military presence.