The Sankei Shimbun poll of 118 major companies has revealed that Japanese companies are perplexed about how to handle their ties with China, as that nation is showered with criticism for suspected human rights violations, including forced labor in the Xinjiang Uyghur Autonomous Region (XUAR). The poll showed that Japanese companies have difficulty verifying whether they have business connections with forced labor in their supply chains and that the companies cannot take action even if they recognize the need to do so. These companies’ troubles are likely to increase as they come under increased criticism about the China issue with the Beijing Winter Olympic Games on the horizon next February.

“We are still thinking about how to investigate the matter because a wide range of our products could pose the risk of the involvement of forced labor and it is hard to determine whether the work is being done by Uyghurs in circumstances of forced labor,” commented a real estate company executive who said his company has not looked into whether it has any connections with forced labor.

In addition to the 29 companies that are not conducting a probe, 27 companies did not answer the question. The “no answer” category included companies that have initiated an investigation but do not have results yet. “We keenly sense how hard it is to ascertain what is really going on in the supply chain upstream in China,” commented a transport company that is now conducting a probe. He spoke of the difficulty of managing the risk of forced labor in projects and supply chains in China, which does not disclose much information.

There are suspicions that minorities are being subject to forced labor on a large scale in XUAR, and Japanese companies are starting to be impacted by this human rights issue, as witnessed by the U.S. authorities’ impounding of a shipment of Uniqlo men’s shirts due to a suspected violation of that nation’s ban on cotton products produced in the XUAR. Japanese companies are being pressed to assess and address risks so that their business is not negatively impacted.

“In hearings with business partners, we confirmed that some manufacturers were using forced labor,” said a retailing company that conducted a probe. “We decided to change the materials used in the products we are involved in directly manufacturing.”

There is increasing pressure in the United States and the United Kingdom for their governments to decline invitations for government representatives and diplomats to attend the Beijing 2022 Winter Olympics unless the Chinese government demonstrates a verifiable improvement in the human rights situation in the XUAR. Some are also calling on people to boycott the products of companies sponsoring the Games. Asked if there is a possibility that their company will change their handling of the Beijing Olympics for human rights reasons, five companies (4%) said they might change their stance. A plurality of 59 companies (50%) said that they will not, and 54 companies (46%) did not answer the question.

Only 20% of companies are enhancing their economic security measures 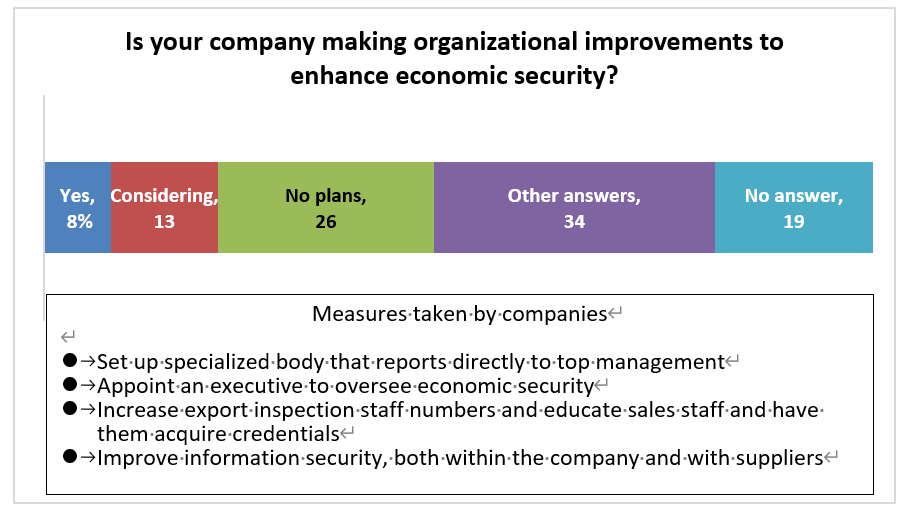 Only about 20% of respondents said that they are beefing up their economic security measures amid the heightening friction between the United States and China. It looks like companies will be faced with the task of accelerating initiatives to protect national interests, including ending their dependence on China in supply chains and preventing the outflow of state-of-the-art technologies.

Amid the U.S.-China confrontation, companies face a growing risk in depending on China for parts suppliers and markets and increasingly need to pursue economic security by considering economic activities and security together. Few companies said that they have placed an officer to oversee economic security or have made other organizational improvements. Only 10 companies (8%) said they have taken steps, and 15 companies (13%) reported they are considering doing so.